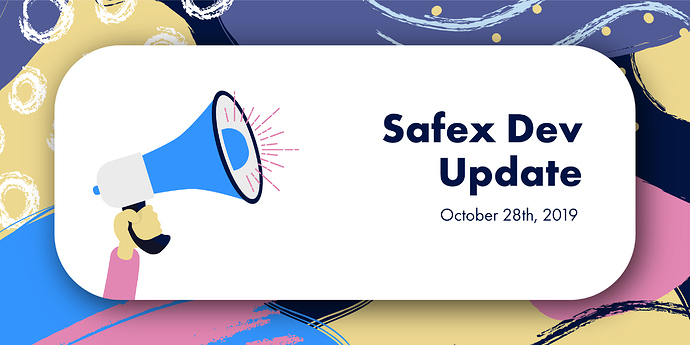 Marketplace
So far the initial unit tests for the Safex Purchase command have been implemented during the last week. Igor managed complete the test that covers the check that the 5% fee is a part of the transaction before being included in a block to confirm that this transaction is properly structured to be accepted in the purchase process.

He will continue with the integration of the purchase feature stack through the week. Below is a diagram of the flow of transactions for the purchase transaction as well as the feedback flow following a successful payment.

We have planned a hard stop for Thursday to assess a testnet release of the latest features already integrated so that we can start receiving feedback from the wild and seeing these transactions taking place live with a group of users to see that things are working properly.

Sails Wallet
On the wallet side of things last week bitcoin sending had been integrated as well as the safe exchange coin, and bitcoin transaction history. Additionally, checks for cases where the rpc might crash, these now lead to a restart of the rpc module in case for some reason unexpected crash occurs.

Beyond that last week the go rpc was updated to mitigation crashing in some circumstances when there could be file permission read errors and also unexpected errors during read/write that lead to the rpc failure. These are now being better handled so the app crashes less and mitigates issues internally rather than totally leading to shutdown.

Livecoin
On Saturday we had confirmed that Livecoin wallets were activated and receiving and withdrawing safex tokens and safex cash. Last week we had procured what we believed would be the final patch to activate the Livecoin wallets and resume activity. And it turned out to be the case.

We’d be glad to take this opportunity to thank our team mates and Livecoin for plowing through the sensitive task of debugging what could be the issue. Step by step we narrowed down what the issue was over a series of emails and transparent software updates and discovered the bug.

This bug is present for mainly advanced users specifically revolving around the wallet-rpc. There are missing checks for funds that belong to you, and they end up getting counted twice in the case if you are sending funds to yourself. This issue was also present in the monero codebase and we had it addressed for safex cash; however, it was not covered in safex token and this caused the hiccup.

The reason this update took several weeks was due to the levels of communication and verification in between each update. This is a sensitive matter and required significant patience and transparency to reliable address the issue. Once again, we are glad by the conduct of both the safex developers and the livecoin team for the smooth process.

Mining Algorithm Update
So far we have merged the update from the monero codebase, and all tests are passing. We are working out two parameters currently: the hardfork date and the difficulty rating reset.

We need to test further the mining algorithm update merge in the wild with an active network before we conclude that we can fork to this new version, also we want to set a hardfork date to include the marketplace functionality we have achieved. This said, we will continue to monitor our progress while preparing a testnet release to best determine what to merge to the hardfork and when would be ideal to bring it forward.

The second parameter: difficulty reset: is critical because there will be a difference in mining rate initially since this changes the output of different types of hardware. If we totally reset the difficulty to 0 the network will be under shock and could splinter and cause many corrupt blockchains on people’s computers and few totally correct copies, and in the second case if we leave it too high, the whole network will stall because we must catch up to a hashrate that will produce blocks so the difficulty can adjust naturally.

This new mining algorithm levels the playing field between gpus and cpus so from then on, your ordinary household cpu will be sufficiently competitive to earn safex cash consistently unlike ever before.

Migration
The next Migration will take place October 30th, this week. Following migration will be on November 5th.

Remember the last day to migrate Safe Exchange Coin for Safex Tokens is November 30th 2019. Don’t wait, go download the Sails v7 wallet found on safex.io/downloads and migrate before it is too late.

Bravo team! The best update in a few months. Keep the good work.

One Question on the graphic regarding Feedback: will it eventually by two-way feedback, ie. Sellers giving feedback on Buyers?

I think this would be a useful metric for Sellers to avoid interacting with Buyers who try and game the system (eg. Claim a product never arrives).

without a dispute resolution system the buyer could always threaten the seller of a bad review and vice versa. Until there will be a real escrow and dispute resolution system people will only buy from “trusted” sellers like Balkaneum which greatly reduces the reach of the platform.
I can see at least 9-12 more months of development before we get a real marketplace usable by non programmers to buy stuff from 3rd party sellers.
Looking forward to play with the testnet in the next few weeks!

dan cant giv a date neither can you.

and represent as you dont speak for everyone

If someone starts treating others to much they may get better ratings first, but soon on other platforms the experience with seller will be reported and he will be descredited.

There are so much of blockchain forums…

In the end most sellers will understand that they don’t do themselves a favor by going that way. It’s in there own interest to play honest if they want to stay longer.

And since there is a view key for every transaction (which includes messages) I could even proof to everyone what he wrote me.

Put that on safex forum and his store is destroyed and everyone can check for themselves it’s true.

That’s much more powerful than Amazon where all I have is Screenshots which could be Photoshoped, but blockchain is unchainchable - just bring that out as best practice for froud and it will solve itself

It is not entirely true that such as system will only cause stand offs. People want to get on with their business, as @Mex pointed out, if you made such fuss then it will be knowable if people are serious about the issues with any particular seller.

Buyers are sending money in advance so they are fulfilling their credibility up front.

And since there is a view key for every transaction (which includes messages) I could even proof to everyone what he wrote me.

Put that on safex forum and his store is destroyed and everyone can check for themselves it’s true.

That’s much more powerful than Amazon where all I have is Screenshots which could be Photoshoped, but blockchain is unchainchable - just bring that out as best practice for froud and it will solve itself

This is data you would want to provide to the escrow should things go wrong or to a court in case you had enough information to form a lawsuit.

In any case, the escrow feature is next top on the list, although in my experience online with crypto and merchandize is that generally people want to do a deal and move on. Out of 1000+ trades of done online in 2014-2016 only in two cases someone tried scamming me in any unobvious way.

At this stage though, trading with reputable vendors will be helpful to avoid getting scammed, eventually though all the scammers get exposed and everyone is better off for that.

I hope i got this wrong but:
Any seller can buy from himself with different account,wallet,pc,connection and writing messages to himself just to build reputation nobody will ever know and when he got the chance of profit the seller will steal the money and go. Then he will do the same again from a new profile,new wallet,new pc,new connection . How can we trust a seller? I mean what if i want to buy something expensive , will the seller deliver ?

If they then proceeded to scam after paying lots of $ to the system, then the first few people will be able to negate all of their previous feedback.

Another thing is that if a user only has a bunch of tiny transactions on their account, with 99% positive feedback, that should immediately make any buyer suspicious, just based on common sense. If you see someone selling a high-ticket item that only has small sales on their history that’s a clear red flag and any user interface could display a warning to the user or exclude them entirely as @dandabek said .

thanks for clearing this out for me dandabek and ulrich95. That’s a smart technique . Now i feel much more comfortable .

Yes, thanks. That was interesting.

@dandabek Hello. Any news regarding hard stop and start of testing on testnet ?