A call for shared information

I recently wrote an article on the SAFEnetwork and planned on promoting SAFE exchange… But since Daniel hasn’t provided a progress update in some time, I’m reluctant to do so. It almost seems like the project is dead… Link here http://www.tflholdings.com/blog/the-safe-network

Hey there @tlogs, since we’re more focused on trading and the wide range of markets available that is why we are not just posting much about safe network. Safe Network forums is about decentralized internet and such; safe exchange is about trading. I share posts and findings about alt coins regularly.

Thanks for sharing your article.

BTW now that I read your article, let’s share some information: safe network by maidsafe doesn’t intend to have some blockchain;

a decentralized internet solution based on blockchain technology.

@dallyshalla I apologize for ranting a bit in this post. I understand why you don’t discuss the SAFE network but in the past you updated the community on progress made on SAFE Exchange development… That’s what I was alluding to. Thanks for giving the article a read. You’re right that was an error on my part. I’ve since updated the article. Let me know if you see anymore inconsistencies.

Yes @tlogs, a more formal development update is in order. It will be given with the release of our proposal and voting application. This way our community can give their substantiated opinion. Here is a preview. By the way, I’ve now taken over user interface development as well. So This is the result of a program with a Rust service, and an Electron user interface built in Typescript and Angular2. Yes, my repertoire is now all encompassing.

In it’s current state it will produce a vote against a proposal, command line versions have been completed. A website for it is in need to host the proposals, votes, and results. Good and reliable help is hard to find, glad I am capable and committed to our project.

voting module for SafeExchangeCoin holders. Contribute to safex/vote development by creating an account on GitHub. 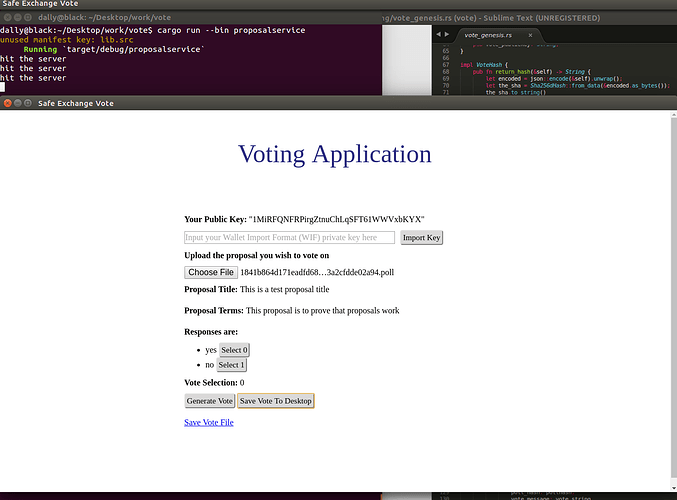 In order to use successfully vote with this application, the user must be in possession of SafeExchangeCoin prior to the proposal formation. This is not exactly the dev update, a formal dev update will follow in the upcoming weeks. Along with a proposal for the Safe Exchange Network.

It sounds too messy anyway. What does Electron have to do with shitty frameworks like Typescript and Angular2? Why do you mix them?

@dvnp that’s an amazing statement. Electron renders Typescript and Angular2 into a chromium browser. So you write the front end part of the application in those languages which is what gets opened up in the web browser.

The crypto and significant application logic is a Rust service operating on the local host. Electron connects to it through UX logic which is written using Typescript, and Angular2 makes the details on the UI responsive real-time updating and such.

You have to check the github to see it.

Why do you mix them?

lol what is shitty about this?

Thanks for taking the time to provide some info @dallyshalla . I look forward to the formal update and voting on the proposal.