Looks like they’ve allowed sale of Safex off the site again just been able to buy some Safex https://safex.io/getsafex/BTC.

Where is this supply coming from? It looks like the Dev team is selling their own stash at 2x marketprice to unaware new investors while the community can only sell on Tradesatoshi for 180. Even their updated video suggests buying on the site and not Tradesatoshi.

Well if the community is selling for 180 on TS, then you can also buy there for that price. You dont have to buy through the website.

That being said, the question about the source of the tokens is a valid one.

I think you’ve misunderstood me. This isn’t about what price I buy. The devs are suggesting to buy from their wallets and not mentioning exchanges that sell Safex for cheaper. Considering Balkaneum is privately funded this begs the question of why do the devs need to sell at 2x and why won’t they mention the other exchanges? It looks like they can buy back at 180 and sell to people unaware of TS because they don’t mention it.

You’re right, it does seem as if they are buying back for 180 and then reselling for x2 on the website. Its a valid question.

Yeah, I made a thread on the forum here and was banned from discord for asking about it when it was mentioned on the 10th of march in the update video. My thread was never approved either so it’s hard to talk about it. Why the secrecy over this?

They will ban at will, are a few users who back each other like some users and admins like rtmattstrat, eddie, pap, some sheep etc . Not bad guys untill you comment or bring in any doubt…More like a cult thing i guess.

Actually you are not correct in your assumptions; if you placed 4 bitcoins in tradesatoshi, the price will increase dramatically.

Using tradesatoshi is difficult and often impossible. And yet there is incredible demand, so we are providing access in advance of the safex blockchain launch which is imminent.

With the launch of the Safex Blockchain the exchange listings will follow that.

However the price on the site can only stabilize with increased volume from an exchange that is capable of providing such volumes.

omg finally a reply. okay first of all I love the project this topic has just annoyed me because I’m confused about things and your discord mods banned me for asking.

Your previous version of buying from Safex.io bought through the orderbooks on Bittrex and you charged a small premium. That solved most of the questions this new arrangement has brought forward. If you switched it to place actual orders on TS like you had on Bittrex I wouldn’t have these questions. I hope that helps you understand where I’m coming from.

The information lacking in your curiosity is: how few participants are in the buy back, also reliability of reply from participants

As well as usual unreliability of TS 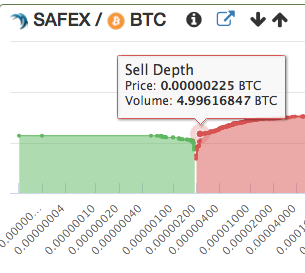 Dan I think the real issue here is the “few participants” who buy at over 400sats are likely not aware of the 180-200sat approx market value of Safex. These are likely to be new investors to Safex.

It wont be a good situation for them when they realise their investment is already at a 50% loss out of the gate.

As you see in the image, there is 5BTC of volume under 225sats. I dont see how a 400sat price is warranted, personally.

The ironic thing is, you’re welcome to create a site as well, and you can handle logistics yourself