I have not received transact from bittrex to cryptopia 12.15

The first transaction created a 12.10 in the amount of 10000 safex came in an hour without any problems 9900 safex.
The second was created with 12.15 am for the amount 34766 (bittrex took their Commission) , but I’m still waiting, although bittrex found the translation completed. 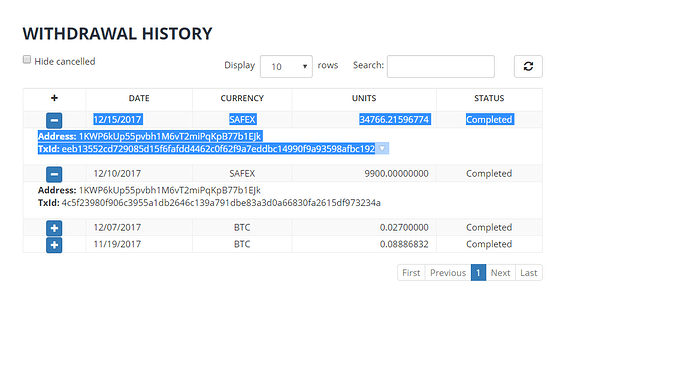 Let me sum up since this has been covered dozens of times now on the forum.

Cryptopia went under mandatory wallet maintenance due to an update in the Omni protocol.

Tons of people like you opened up support tickets with Cryptopia because they apparently can’t read.

Cryptopia delisted Safex because it wasn’t worth the trouble to them.

When they finish updating their Omni wallet, it will show up, but you won’t be able to do anything except withdraw at that point.

Why can’t you people read the communicates? The Cryptopia wallet is under maintenance and funds will appear there as the maintenance is finished

Like other forums, does this site has moderators ? The stickies need to first thing seen or a note when people log on they get a notification highlighting these things.

I don’t feel like there are any. I could be a moderator though

Yes please can someone stand up and do that. I have been on here for 15 days. Yes i have asked 1or 2 silly questions. BUT I have read alot as well im sure some dont even read this stuff

I bought a bit of extra safex the day before they halted , just to over trans fees, I’m sending mine in 10000 lots to be safe

i have same problem. i send 72000 safex to cryptopia

Pls stop posting the same post everywhere. Cryptopia wallet is updating. When its done you will get your coins

Yes for those who have sent to cryptopia just sit back and be patient before you feel the need to post it on the forums as others are patiently waiting also you are not the only one. Do not fear your coins will. Appear with you ASAP.

Cryptopia wallet back up