Found a potential rough diamond investment called cryptoAI recently (full disclosure: I brought some). It’s a machine learning crypto trading hedge fund asset on NXT. Given the skill sets of some of the peeps here, I thought it’d be worth sharing the fact that they are currently recruiting in exchange for equity:

I bumped into them a couple days ago; if those backtesting charts hold up in real life, they are pretty impressive. I’m training my puny little AI right now, so first I’ll see how that works

can you put a link i can’t find cryptoAI anywhere

nvm I found it ! I saw that 100% ICO founding is reach does it still possible to acquire those CryptoAi shares? if yes how ? Thanks for the tip this look really great !!!

Here’s the link to CryptoAi

The asset is on NXT. Basically you need to buy some NXT, download the NXT app, send your NXT to your NXT account, then use the asset exchange on there to buy some CryptoAI. At least that’s how I did it.

It is pretty speculative and you’d expect there to be a difference between back testing and real world results. Having said that the guys running it seem pretty OK and above board to me, and when you have 4 pretty bright people working on something with a market cap of $25k (ish) there’s not too much downside.

hey walet, pls let us know if u were able tl buy ? i’m thinking of it says 100% sold them we may have to wait, but I’m hoping it still works as Luke explains… so ping me if you are successful. Thanks all ! 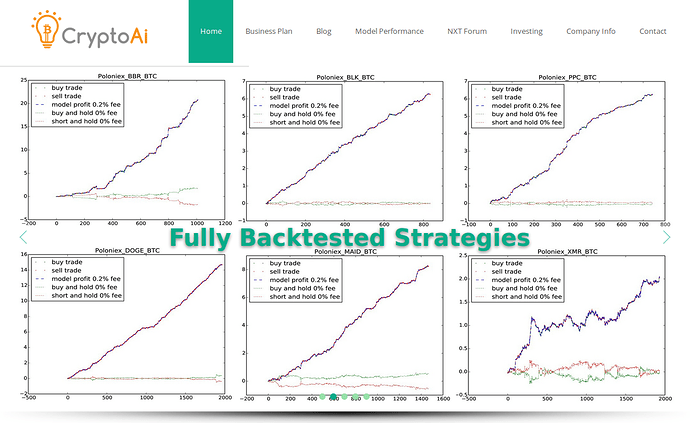 are they suggesting their going to make fees from trading on poloniex??

Our system is currently producing an average return of 15% per month.

My take is, if you can do such returns it is wild to require outside capital; and to add, if someone arrived with 5,000,000 USD are you really going to have earned 25,000,000 USD in returns by the end of the year, in other words does this thing scale?
I guess also its incomplete; would be interesting to see it working for a while if it actually launches, and test empirical returns if at all. Best of luck to that endeavor, like mentioned interesting to see how their model works out for them.

Yes it’s possible to buy on NXT but there is very few sell orders.

Does anyone know the number of shares and how much they pay for each share at the crowd funding?

in other words does this thing scale?

Very good point. I guess the fact that it is a machine learning trading bot would imply that as the fund increases in size it will face different challenges which in theory it should adapt to. In my mind whilst the back testing is promising, it is ultimately a bit meaningless until you are trading against other bots and humans which are trying to understand your trades. I’m looking forward to seeing how this plays out in real life for sure.

On a more general level it seems intuitive to me that ultimately most trading will be done by machine learning type bots in the future. There will for sure be a first mover advantage where these early bots take down the more formulaic trading bots, and human traders, but over time you’d assume there will be a whole ecosystem of machine learning trading bots all competing with one another. As an aside the best chess engines are still able to be beaten by chess engine + human GM helper (n.b. not machine learning chess engines AFAIK but an interesting point I think).

Does anyone know the number of shares and how much they pay for each share at the crowd funding?

There were 1 million shares @5nxt/share

My take is, if you can do such returns it is wild to require outside capital; and to add, if someone arrived with 5,000,000 USD are you really going to have earned 25,000,000 USD in returns by the end of the year, in other words does this thing scale?

So yes, this is my concern, too: once you start trading volumes big enough to affect the market, the same strategies will simply no longer work (and I think it works the other way too.) Also, why make it a product if you can make 15% a month? You just won’t be able to beat that with paying customers…

Also, why make it a product if you can make 15% a month? You just won’t be able to beat that with paying customers…

We have had a number of scam companies in AU that reside on the Gold Coast and randomly ring people saying they have a program that will make them xx% per period and it only costs 3000-10000$ dollars to get in on it. Slick marketing and promises of becoming rich over time. And then there were the HYIP programs on the gold payment system.

If the program would allow you to double your money every month then why do they need your money. And even at 15% per month, they could just get a personal loan and be millionaires in 2 years. No need for support to the customer, no headaches answering all the emails etc etc.

Scalability is always a problem for any trading system. If you are the heavy weight then the dynamics is different and in the crypto world you become the shot caller.

I think that crypto is far too illiquid for any big accounts. If trading on automation it would require a far smaller target of profit than what could be possible in the mainstream markets… This is all subject to change, and depends on the trading volumes found at exchanges.

Hope this isn’t too off topic. Anyone here ever hear of cooltrade?? And what are your thoughts on it if so

Hope this isn’t too off topic. Anyone here ever hear of cooltrade?? And what are your thoughts on it if so

Found some pretty bad press for these guys when I was looking into them which was enough to put me off.

@Luke I felt the same way which is too bad cause they seem to talk a good game. But since they run an affiliate program and basically a pyramid scheme I guess I’m not surprised. Man it would be sweet to have a collection of trading strategies proven by members of a community and just plug that into a bot and watch it skim cash from the greediest people on the planet. Sounds almost too good to be true

It seems there is a consensus not to use this cryptoai thing that was in the op.

The only honest companies on this field are the ones that let you use their platform but require you to put together your own strategy.

“Here, I have an awesome strategy, and I’m willing to let you use it if only you pay me a little.” <<< hmmm, let me see

Only if its free, because sometimes the tools are completely arbitrary… and could be totally meaningless, as good as throwing darts at a dart board to pick your lottery ticket numbers lol