Testnet 3 - Marketplace
Last week on Friday we released the binaries for Testnet 3: The Marketplace

In this iteration we have introduced the following functionality:

Users of the testnet are now able to make accounts which enable listing of offers which feature a title, quantity, price, and description.

You can download the testnet 3 binaries and try it out here:

The first pioneers went online over the weekend, here’s a list of offers we found: 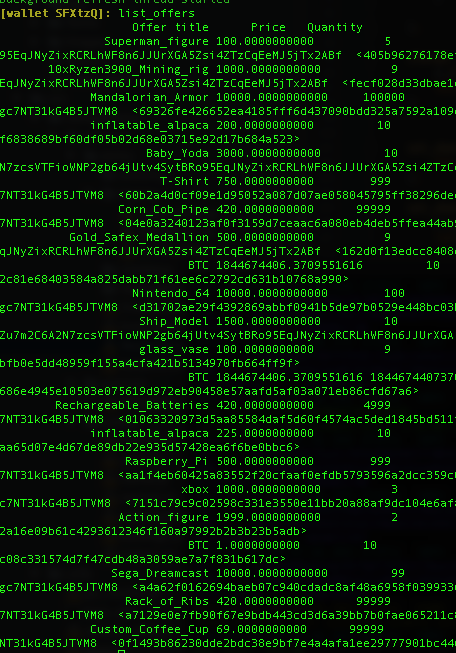 In the next section we will cover our plans for improving the user experience as this is a raw output of the listed offers directly off of the safex blockchain.

This is the feature that was demonstrated during the Belgrade Blockchain Summit mentioned in last week’s dev update. A video is featured here:

Feel free to post your testnet addresses here to get some tokens and cash to get started!

Marketplace
During the last week Igor prepared the codebase for the testnet 3 release. As this is major step we have kept the feature as simplistic as possible. As such there are a number of improvements that the team has mapped out and now has a specified check list of tasks to perform to make the marketplace readily consumable.

This task list was being meticulously defined and it is what is front and center for development. These tasks improve the user experience of purchasing, listing of offers, and collecting revenue from staked tokens. Including metrics and observers so that the wallet can also be able to track the payments.

We are moving up from the engine room and dealing in the implementations that meet your fingertips. The testnet 3 stage is a proving ground for our design of the underlying mechanisms for listing and clearing offers over the blockchain directly.

Sails
During the last week the team worked on resolving transaction formation bugs and now have moved towards transaction sending. This involves adjusting the formatting of the dataset in golang to be consumed by the c++ based safexd.

Also, a bug while synchronizing has been addressed, so the gosafex module can reliably regain sync mode if there was an interruption or corruption during the syncing process.

Remaining tasks in the gosafex module which the Sails wallet rests on:

RandomSFX recognized in the wider crypto mining community
We’ve seen a significant increase in miner interest in RandomSFX over the last few days, and it’s great to see existing community members go out of their comfort zone to learn how to compile their own miner, and even build their own mining hardware.

With this in mind, it will be even easier for you to get involved with mining Safex Cash as the algorithm will soon be implemented in the next version release of XMRig (It looks like it’ll be included in 5.4.0). The beauty of this is that the XMRig team tend to release Windows pre-compiled versions with each major release, and it also reduces our developer burden keeping or forked version of XMRig updated with the latest performance/bug improvements.

There has been some significant performance improvements seen in the latest XMRig build - on average around 10-15% increase for Ryzen based systems. This means you’ll get more hashrate on average, and ultimately more Safex Cash to spend on the marketplace…

One again, huge thanks to Safex mining community for their support and involvement helping first time miners get involved.

Huge shoutout to those guys! Looking forward to seeing more guides and tips from the mining community.

1 Click Miner
Additionally, we have tasked the 1 click miner to be updated. Since the RandomSFX hardfork it is not reliably possible to mine Safex Cash from usual household computers and generate a noticeable amount of coin over time.

Today we have received the first iteration of the update to the software that powers the 1 click miner. This needed updating for RandomSFX as well as a number of other improvements that took place over time since the last version was released.

We will keep everyone posted on the progress here, and we are focused to get the miner in everyone’s hands as soon as possible.

Bravo team, can’t wait till 1 click miner!
Just do it!

No mention of exchange wallets…

Nice update safex team. There has been rapid, impressive progress the last couple months. Very excited for this to launch early next year, so we can start locking away our tokens away and spending our SFX on goods.

Any word what’s up with Livecoin not able being to deposit and
withdraw…again? I’ve sent them a msg but no response.

Consider that just only 7 days ago was the hardfork v5 released. This was an unanticipated update, so the process of updating once again twice a week apart then there will be a bit of lag to get wallets reopened.

Sorry for that inconvenience , yet I am glad that we were able to act quickly in keeping everything moving along.

Thank you for your consideration by refreshing the issue as well, there are a many frontiers for safex and it is always great to hear what are the standing issues and tasks to resolve.

I agree with lots of Frontiers Yahoo