Safex Marketplace Progress
During the past week Marko had been connecting the block explorer to the marketplace testnet. He successfully finished integrating staked token and unstaking tokens, as well as exposing advanced outputs (which are used for storing marketplace functionality)

Furthermore, Marko has been reviewing the recent bug reports from the Monero development community and considering if any of those issues are affecting the Safex codebase.

Also, the dashboard for viewing the state of tokens in the blockchain and the metrics related to revenue share is advancing. There are a few elements to construct that we discussed last week and we will be implementing these into the golang module. This will be data from the blockchain about how many tokens are staked, the amount of revenue generated, and how many safex cash have been extracted from the revenue pool.

These metrics will be implemented for the global view as well as the personal user view. 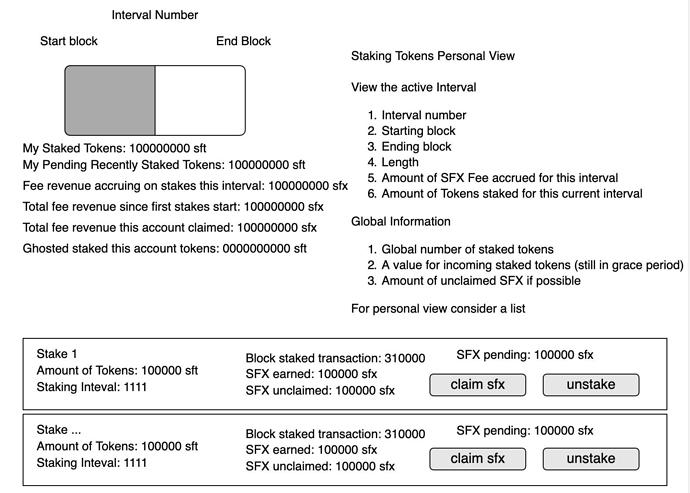 image1584×1134 258 KB
Here is an image of the wireframe and concept described which is now moving forward for development. This dashboard will be integrated into the Sails Wallet as part of the Token staking module.

Sails Wallet
Stefan sorted through some bugs found in account creation in golang when recovering the account from mnemonic seed phrase. This bug has been resolved, it was related to some code started a while ago now been picked up and tied into the main project. Edoardo took the account creation fix and did the integration to the wallet system of the golang module.

Following that he switched back to coding the ring signatures, which is the last step to full utility of the golang module. This week

that this part gets done.

The last week Mirjana worked on the architectural level of the Sails project: setting up connectivity to the golang module endpoints with account & key creation.

Also last week we discussed further the wireframes and design to make a better flow for account creation and managing the legacy wallets and reached conclusions along the way.

Our immediate goals are account creation with the Sails Wallet: from there the world is our oyster making and interpreting transaction.

Safex Website
Uros and Dusan are now focused optimizing the pages done already to appear properly on various mobile resolutions. We are not far off from launching this updated website. Meaning we have a goal to put the new site out within the next two updates.

Migration Script
The next migration for Safe Exchange Coin holders will be processed on July 13, 2019.

Keep up good work. Will MP be implemented on some new website/webshop also done by Balkaneum ?