Orbiter Wallet
Last week we released the Safex Orbiter Wallet. This Wallet works with Safex Blockchain Keys and is for Safex Cash and Safex Tokens.

This wallet addressed a number of bug fixes as well as introduced a more user friendly flow which allows easier control and access to various features such as: accessing your keys, changing the number of rings in your transaction, among others.

Additionally, a particular focus was put on addressing the problems with blue screens experienced mostly by Windows users. Most of the known issues are resolved.

The remains a single issue related to blue screen on Windows, which happens when a user logs out of their current wallet and tries to recover another wallet. A simple application restart sorts that out.

Also, If you’re using Mac OSX and experiencing issues, you may need to update your operating system in order to successfully run the Orbiter Wallet.

Note: we’ve given a naming convention (Orbiter Wallet - Cash/Token) so we can better communicate and differentiate between the exclusively cash/token wallet and the wallet we’ve already been using for some time which includes the migration system and bitcoin aspects. The Migration System Wallet (v7/upcoming v8 is called: Sails Wallet)

Sails Wallet
During the past week we’ve discussed further the application flow, and added more optimizations to the wireframes. The challenges we are conquering involve including Bitcoin and the Migration system without exposing new users to those aspects unless explicitly in demand.

Mirjana our dedicated developer on the Sails Wallet has hit the ground running. So far she is successfully pulling balances in Javascript, this is a huge breakthrough since it is our own native code interacting with the blockchain information directly to the GUI application (previous sfx/sft wallet inherits code from C++)

Further research went into integrating the Go Lang aspects into the Sails Wallet and trans-compiling those elements using gopherjs and testing how they operate within the javascript environment.

Also in the past week we have added to the specification to include all of the possible known wallet formats. So if you used Orbiter Wallet you will be able to load up that file in the Sails Wallet.

The Sails Wallet is the one that will become the marketplace wallet eventually.

The rest of the week Daniel and Mirjana will be completing the wireframes and moving toward the sprint that implements the list of features required for Sails Wallet (v8).

Go Lang Libraries
Last week was a strong sprint from the team in the Go sector:
They tackled two fronts to integrate creating transactions with the Go module and the safexcore demon. We now have two additional protobuf endpoints one for get_output_histogram and get_outputs which are key components in forming new transactions in the Safex Space.

On the Go Lang side: Edoardo has refactored key types as well as added unit tests for that refactoring. And furthermore he has taken up the task on the balance update module which will lead into creating new transactions using the new protobuf endpoints for getting outputs out of the blockchain.

Things are moving faster than ever here.

McAfee Miner
We are preparing an update to the McAfee Miner. The update will include the latest version of safex-nodejs-libwallet, as well as updates for the UI and options for changing the transaction mixin when sending transactions as found in the Orbiter Wallet.

Safex Marketplace Progress
The past week Marko has spent refactoring and updating command execution during transaction verification. As well as adding a direct function for extracting the Safex Revenue Calculations on Chain.

Additional fixes to multi command execution on transaction inputs, as well as the ability to manually selected which tokens were staked and the possibility to unlock them in the order chosen by a user or program.

Additionally, we have worked on the User Journey of the marketplace, and it is shaping up well. It is becoming ever succinct and clearer to implement and we prepare to be used by many.

June 10 SFT Migrations
The migration run today concluded ~72,000,000 added to circulation so approximately 44.5% of the tokens have made it over to the Safex Blockchain with 5 months 20 days to go until the deadline (November 30, 2019).

Safex Website Update
In the past week we have continued on the deliverables for the website. We expect that during this week the majority of the website is completed. In addition, a script for a new informational video was prepared along with visual queues which will be implemented next week.

We are very focused on making a great website and add content that clearly demonstrates the world changing aspects of the Safex project and how to be involved.

Safex Development Community Program
We have chosen 30 members to be a part of the beta tester group. To go along with that we have been sourcing Quality Assurance specialists to assist us in coordinating testing between developers and the tester community.

This will thoroughly increase quality and reduce the annoyances of breaking code. Of course not every single case can ever be covered however we will avoid the obvious mistakes, and also have a more structured and organized release strategy especially as we gear up for massive onboarding of users.

We’re preparing some final support documentation and aiming to open up the development discussion channels this week. If you’ve been accepted for this round of user testing you will receive an email. 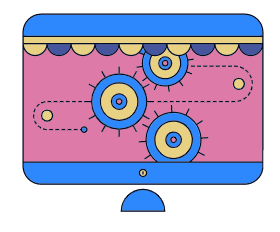 I like the illustration. Is that new safex design?