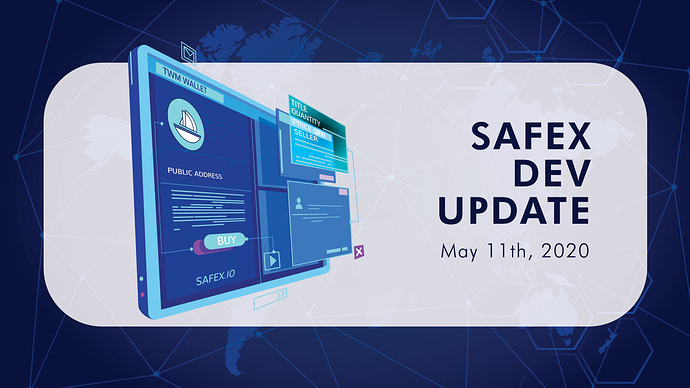 TWM Wallet | API
So, in this iteration of the TWM Wallet the testing community will be able to interact with the Merchant Interface. This view allows you to cycle through accounts you have made and see listings you have from that account.

You can make new accounts here, when selected you see an expanded view of the account, as well as the options, and also you will see the offers that the selected user had listed. From here you can, as that user listed in items for sale. At this stage editing is not yet enabled, though Modal forms for listing offers and creating a new account are already in position for being expanded into editing existing offers. 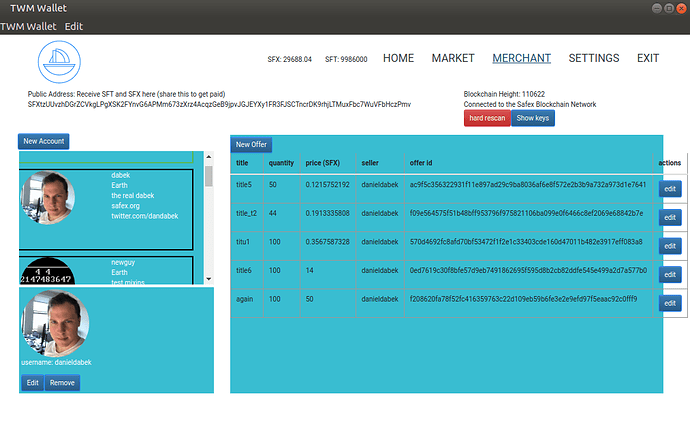 Next steps are two fold:
Integrating purchasing, and linking up the accounts to the TWM API to enable messaging.

This week the aims are to clean up a bit more the CSS, and link up accounts to the TWM API and the messaging system.

We also found a bug in the offer listing function where the number from the javascript environment would convert into a different number in the adapter to the C++ code for making the transaction. Igor took up the task and adjusted the parsing to be consistent with the conversion between the two environments.

During the last week the restructuring took the direction of the TWM Wallet in a better direction. While it is not aesthetically nice, though intuitive, the first step we are taking is to put all the necessary functionality in first. I am not at all good with CSS due to not spending much time there, however, once the actions are embedded any decent front end developer will be able to neatly arrange these elements in a picturesque fashion we have been known for. Note, we will take suggestions if any developers reading would be interested to participate.

Safexcore | Marketplace Protocol
During the last week Igor did some ongoing refactoring and also cleaned up the logging from false positive error notifications.

In the safexd client during synchronization there were some error messages displaying when no error was present, so instances of false positive error messages have been cleaned up from the logging system.

Further, Igor continued with refactoring of the advanced transaction validator. This will remove the throw and keep the node from crashing when there is an inconsistent order of transactions coming into the transaction pool. This refactor will handle errors and sort transactions out of the pool that are invalidated by another transaction. This we expect to be among the finalizing cornerstones towards release.

This week we will release the newest client with these updates. We will not restart the test networker with this update and continue from where it left off.

Testnet 6.5 Status
Last week we released the version 6.5 test network to which we committed constant resources to simulate a live network. Many others joined and my node at home where I’m testing the TWM Wallet with has 16 live connections, and after a survey of 3 other nodes we set up on various parts of the planet we estimated the network to be 40 active nodes supporting the testnet and so far since last week there have not been any glitches to cause network breakdown.

sfxos | plug and play safex cash mining operating system
In the March 30 update we mentioned of a special purpose built operating system for mining safex cash. This system has now concluded an iteration ready for general usage. You are able to put this software on a usb drive, then plug it into a computer. Boot from the USB drive and make sure it is connected to the internet. Then from any computer on the network you can navigate to it’s ip address and plug in your safex address and it’ll begin mining.

We are preparing a write up of how to use it and where to download it. We hope that it would be a great addition to our software suite, and we’re glad to have this put together.

Thank for the detailed updates, my brain is happy, so happy!

That’s beautiful work​:+1: That’s what Trump would have said