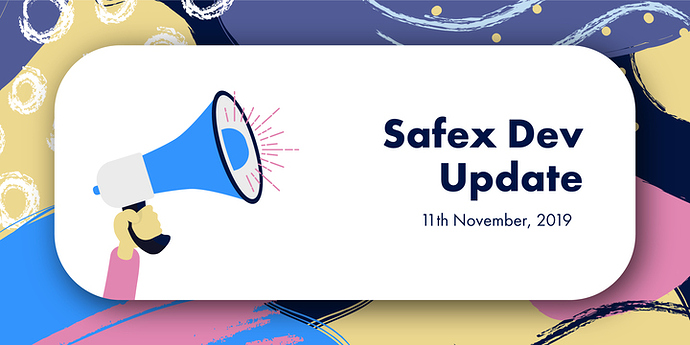 Marketplace
In the past week Igor continued to work on the safex offer to improve the implementation. The refactor further stabilized the create/edit/close routes for use in the purchase flow.

So far we also gained some insights from the testnet where the account keys were stored directly in the block file when an account was created. We have since added an additional file that is handled by the wallet with the .accounts extension to store created accounts along with the key sets encrypted by the wallet password. This is much needed when it comes to restoring a safex account in a different wallet.

Additionally, the explorer for the test net was updated to incorporate the new transaction types and will be pushed this week.

Sails Wallet
During the last week we documented the flow for sfx/sft transactions within the GUI and began to implementing this feature. After this the wallet will be operational to release for testing publicly, ahead of the main release.

We have discovered a few additional minor bugs in the gorpc to investigate and address which we have an impression that these will be the last of the bugs before we are able to release the rpc for usage generally.

During this week the teams will meet and work together to wrap up these existing tasks, and see to it, face to face that it works. Also, during this hackathon event we will be working side by side to assemble the GUI and rpc for account creation and fit in the foundation for offer creation and purchase.

Migration
The migration from November 10 is taking place tonight: November 11th. The next migration will occur November 15.

A reminder that November 30, 2019 is the deadline to have your Safe Exchange Coins migrated into Safex Tokens on the Safex Blockchain.

Please do not wait and download the safex wallet with the migration system, and migrate. Feel free to post to the support channel on this forum for prompt assistance.

Migration Wallet Update
Last week Daniel released a patched version of the v7 wallet mainly in the migration procedure. Where some users were stuck with setting their desired address to migrate to because the wallet has a block from sending a transaction if you already had pending transactions, but it is too loose and it would skip the second half setting and put you right at the burn phase. This especially happened if your internet is very slow, and you go ahead and clicked the next step before your transaction got seen on the blockchain.

So far there is a release for this new wallet (v8) for OSX. A release for windows and Ubuntu will be published on November 12, 2019. If you have not yet migrated and you were planning to do so, feel free to download this new wallet and migrate with that.

https://github.com/safex/safex_wallet/releases/tag/0.0.8
This is the link to the wallet with an upgraded migration system

Mining Algorithm Update
The mining algorithm has been merged and it is now passing tests. This week we will prepare it to be launched onto the testnet and let the community test out their hardware on the new algorithm that favors CPUs.

Ideally we release the mining algorithm update with the marketplace features, so we will conclude what is an optimal release date this week during the developer team meeting.

Coinmarketcap.com Now Tracking Safex Cash (SFX)
Some time last week coinmarketcap.com the leading cryptocurrency index site updated the Safex Cash listing and it is now tracking the supply and the market capitalization of our coin.

So maybe buys/sells/divs before Christmas?