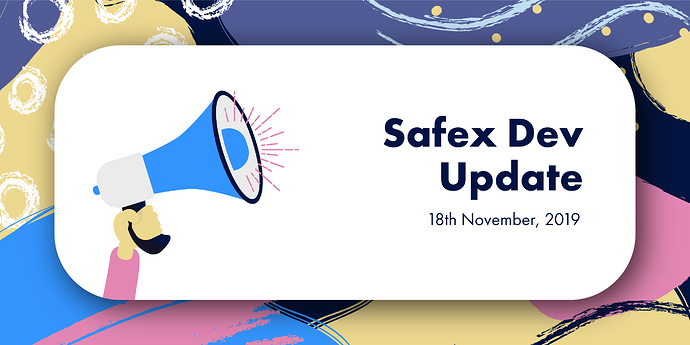 This is a TestNet fork to test the new mining algorithm in the wild.

During the last week Igor and Edoardo merged the RandomX mining algorithm update to the testnet branch. This update introduces a hard fork of the mining algorithm that is currently in place to a new one that is utilizes resources in a way that CPUs become more advantaged than the GPU hardware.

It is known that GPU centric mining algorithms are able to be programmed into FPGA devices and perform exceptionally better when the costs are considered. This makes clever hardware engineers with capital capable of dominating the network and acquiring the lowest price Safex Cash than in the case of ordinary graphic card miners.

In this patch the shift goes towards empowering the CPU where the GPU is still capable of competing however, the cost of setting up FPGA to accelerate mining without accelerating cost is eliminated.

Using this new mining method the distribution of coin can go more horizontally since ordinary household computers can mine visible amounts over time, whereas previously this was interrupted by the specialized GPU engineering to capture Safex Cash.

Luckily the supply of Safex Cash could not centralize since the adoption of the S-Curve distribution schedule which means that over time we distribute rather than in the case of nearly all coins on the market, these situations of clever engineering would result in a massive intake of the coin supply. We mitigated this, and of course in the future if there are some new clever capabilities emerging we will update the algorithm accordingly.

You can download the testnet binaries that include the RandomX mining update here:
https://github.com/safex/safexcore/releases/tag/0.0.2-testnet-randomx

Please also remember if you try this software, you must run it with the --testnet flag on both the cli wallet and the safexd in order to participate properly.

*the windows compiled binaries will be uploaded as soon as available, be sure to look out for them within the next 24 hours

New Testnet Explorer
Last week we also deployed the updated block explorer to the testnet. This new explorer now includes the new transaction types like create account and it is set up to repeat the pattern with the future transactions types such as list offer and purchase offer.

The link to view the testnet in action is here: http://testexplorer.safex.io

image1138×518 147 KB
Here is a screenshot of one of the transactions included in a block that contains the create account method inside.

Marketplace
During the past week all of the code from the various branches were merged into develop. There is a significant amount of development that went into setting up the marketplace system. These are now in progress to be consolidated and tested in the whole picture. There are ~6 months worth of development that was included in this merger.

A merger of this size requires many internal testing to address any regression that pop up from merging several features to the one unified branch. This been started and will continue through this week and it will likely take until next week to have a fully integrated merger.

You can see a scroll through the update to the develop branch in a recent tweet as soon as that update was put through.

this is becoming quite the update... https://t.co/FEUz17fo5O

From this week we will continue with the Purchase Flow with a goal of bringing it the development phase of integrating the feature into the wallet to be capable of allowing users to start test purchases. Already we have implemented the core tests that prove that the system under the hood is working as it should be. Now we work our way up the stack to your fingertips.

Sails
Last week we had our team from Serbia meet up with our team in Italy to work hand in hand on the Safex development. Besides merging the RandomX update discussed above, we managed to implement the account creation route into the gorpc project.

This was a massive step because this established the pattern we need to implement the offer listing and purchasing flows among all the other new special transactions we have introduced and will continue to introduce such as price peg. We’re all glad to have been able to mark this off our checklist as it was a major milestone to reach.

We’ve continued to work on optimizations on the gosafex repository where we reduced from the ~2 hours sync time down to ~45 minutes sync time. We are now in a range that is comfortable for people to use in a desktop environment.

Regarding the GUI development, we had taken time also to rethink parts of the flow of the wallet usage and we are in progress implementing those new paths for a more user friendly experience.

Furthermore, the project dependencies were all fully updated to the latest versions and we believe that this may have had a connection with why some users were not working on Windows or OSX. The version match to the latest of all packages also meant that some features needed to develop the GUI were broken so they had to be addressed. Thankfully the GUI production is on track since these updates were handled.

Additionally, we have discussed plans for the mobile wallet implementation and the few approaches that we can take to satisfy the resource requirements for users to sync their balances. While there is no silver bullet between performance, resource utilization, and privacy; however, we have ideas on what we can do to make a practical and secure solution to participate in this ecosystem from mobiles and the like.

Migration
The last migration script run concluded on November 15th, and the next one will be conducted Today, and each day from November 23rd until the 30th.

If you still have Safe Exchange Coins, you must download the migration wallet, and convert them to Safex Tokens before November 30th, 2019. This is less than two weeks away. Please remind your neighbor to be sure that they are aware of this event concluding in case they are still holding Safe Exchange Coins in the Bitcoin Blockchain.

The latest Wallet release for Migration are here:

This version also includes additional safe guards to ensure that your safex address is set correctly in the event of inconsistent internet connectivity.

Forum Emailer Bug
The third party we use for the forum emails had changed plans so it limited us to 100 emails per month. We have since replaced this emailer that will allow us to continue operating as previous. Due to this for the past week new registrations were not working since the confirmation email did not make it to the user.

This is all now patched up and fixed. You can now register freely as before.

The testnet forked successfully, the difficulty adjustment, and the mining algorithm kicked in exactly as expected. All systems go!.

we’ve uploaded the windows binaries, so you can try them. There may be some extra configuration needed on windows, just a heads up.