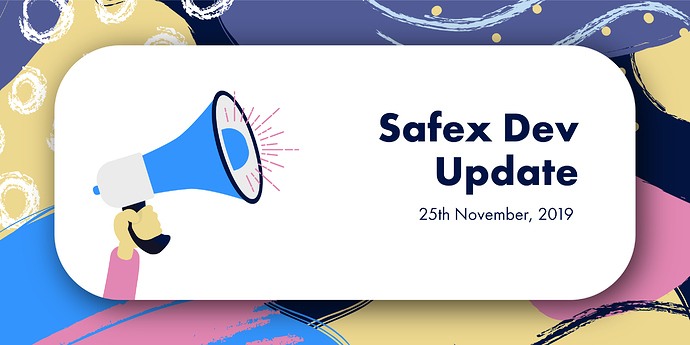 Migration
The last day of migration is November 30, 2019. This is 5 days from now. Each day the migration script will be run until the final day.

If you have not yet migrated your Safe Exchange Coins please be sure to download the latest wallet (v8) and follow the steps found on this page https://safex.io/migration

RandomSFX Hardfork
We are scheduling the RandomSFX hardfork for block 330,000 which is approximately 6:00pm (CEST) December 2nd, 2019.

RandomSFX is a variant of the original RandomX mining algorithm however it has unique parameters to set our mining algorithm apart from any other deployments. This move will disable hash rental platforms such as nicehash from being able to participate in the mining of Safex Cash which we estimate to be a great step because it gives an even bigger chance for the community to harness the power of the decentralized monetary system according to the S-Curve emission rate.

From the point of the fork, most of your home computers will be competitive with the rest of the network using the typical CPU found in most home computers to mine Safex Cash.

Also, the difficulty will be reset to 330,000,000 which is a 90% reduction to avoid stalling of the network. We estimated that over the past couple of months the mining of our blockchain has been overrun by FPGA specialized hardware found on the mining rental platforms. This patch will eliminate this undesirable activity.

Additional updates in this hardfork include unit tests that were failing as well as the protobuf feature that is integrated into the safexd module necessary for the gosafex rpc module that we use in the updated wallet.

We have created a task to update the one click miner to be compatible with the new mining algorithm and we will release the updated version as soon as possible.

The precompiled binaries will be ready for Wednesday for Windows, Linux, and OSX. So if you are providing a full node, you will need to look out for this update and replace your existing safexd with this new version to be on the current blockchain fork.

We will also notify all relevant parties about the hardfork to be ready for the update.

Livecoin SFT Deposit Fix
This hardfork also includes the merge of the two bug fixes which will address the issue that Livecoin was having with deposits of SFT.

Marketplace
During the last week Igor refactored the account creation and edit features because we discovered a bug that would cause the full node to stall in case of a fork even a minor fork in the block production cycle. This is now addressed and resolved.

We duly made a task to check that Stake and Unstake Tokens as part of the revenue generation system that they are not harboring the similar issue as with the account creation/edit feature. If there is a bug we will fix it.

The main course for this is week concluding the RandomSFX hardfork, then we hope to get back to finishing up the purchase feature and prepare for next Monday testnet 3 where we will be able to list items and buy them.

As per last week Igor continues to clean up all of the code features that were being developed during the last 6-7 months and neatly merging what matters and fitting it into place, consolidating the many feature branches that emerged from the R&D phase of the marketplace development.

Sails Wallet
During the last week Daniel worked on the GUI refactoring that was mentioned in the previous update. So far he has implemented the new flow for merging the old safexwallet.dat into the new .sails format which utilizes the gosafex module.

The merging aspect is completed on the GUI side, however, a minor bug emerged when including certain types of keys that are generated from the safex_addressjs lib. This is a task that is being resolved by Edoardo.

Additionally, a balance bug emerged where specially formatted transactions received were being omitted by the balance checking aspect of the gosafex module. This was not an obvious bug however after careful scrutiny for the edge case, it is handled and resolved.

The goals for this week are to continue with the GUI development of the SFT/SFX transactions aspect of the wallet, which will be the last element needed to release the Sails Wallet.

It will not destroy the previous wallet, but leave an indicator file in the same location as safexwallet.dat letting the wallet know that we already merged, so you can always check back your safexwallet.dat or back it up just in case you wanted to preserve it in the future.

We back tracked a bit on this aspect of the project, however, the trade off is a more stable experience due to the version updates of the packages in the application and the optimized flow that relates to the wallet we are already familiar with.