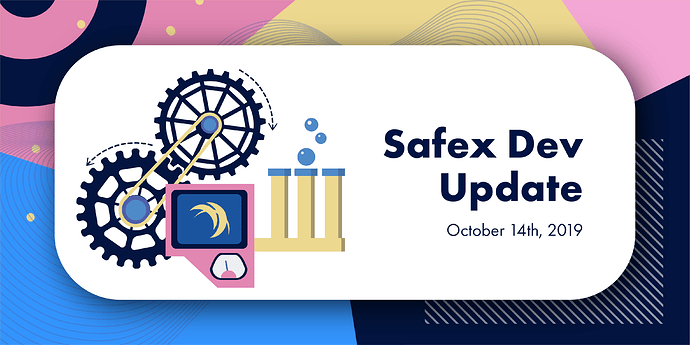 Up on deck is the purchasing flow: so the ability to send money to an offer and settle the delivery of a product. There are a few directions that we can take that expose different levels of advantages such as anonymous buying (no account needed to buy), and the ability to provide different methods of shipping, and how we can expose more rails of the protocol to add more dynamism to the marketplace experience.

Sails Wallet
In the past week we’ve made progress integrating the Bitcoin keys and systems associated with making transactions. Alongside that development Mirjana has been continuing with the refactor to make the wallet efficient, to reduce lag and load times. This refactoring will continue through this week with a goal to finalize in this week.

During our testing of the wallet we uncovered some bugs related to transaction forming in the golang module, and this bug is being investigated since Friday when it was reported. While we resolve the refactor on the wallet application this bug should be addressed and fixed during this week so that we can wrap up sfx and sft transactions and move onto adding the marketplace functionality into the wallet.

Intermittent Safex Wallet Outages
On Thursday the Omni node that services the safex wallet (v7) and migration system tripped an edge case in the Omni client. After an unsuccessful resync into Friday, Daniel took measures to update the software that was released in May by the Omni team which addresses the issue. Alongside this version update we also upgraded and deployed to new hardware with more resources.

Furthermore, into the weekend a number of assets that service the safex wallet (v7) and the orbiter wallet were attacked by a sophisticated ddos exploit utilizing high amounts of resources putting stress to the systems preventing synchronization. Daniel had spent the better part of the weekend singlehandedly setting up the security protocols on these assets to prevent unauthorized access by the attackers.

We will continue monitoring the environment to quickly prevent further outages of this duration.

Additionally, redundant nodes are in progress synchronizing to combat these issues in the future. Also, in the future version of the safex wallet (sails wallet) there is an option to set your own blockchain node, so if the provided one is knocked out or you prefer to use your own full node you will be able to set it yourself and continue uninterrupted.

All services should be operational as usual.

Livecoin
We have not yet received an updated response regarding the previous patch we have provided to the wallet rpc.

Migration Script
The next migration run will be October 21, 2019. Remember that the last day of Migration will take place on November 30, 2019 (6 weeks from now).

@dandabek if you guys still have to start the blockchain implementation of a buyer interaction with a sale offer AND you have to start coding the marketplace wallet UI AND the rest of the TODO list from the Sept 30 update, how was it possible to publicly aim for a beta release by October 15?

The Oct 15 date was covered in the September 30 update, this date came up during a QA in Amsterdam when I had mentioned the target for Oct 15, considering where development is at, we are not far off from our goal.

If you don’t mind being without flashing shining buttons then there isn’t much delay to putting the UI together.

@dandabek actually, it’s quite the opposite.
it does’t take much time to add shiny icons and background images and it does takes time to build multiple screens with forms, data validation, tests, etc. required by all use cases.
A simple bullet point in the TODO list like “order management” could imply months of work at the current team velocity.
It would be great if you could show us some wireframes of the marketplace wallet UI just to see what “order management” actually means.
Thanks again for you reply!

we will be in touch about the progress as usual

just let the team work and don’t care about when. We all want them to launch a perfectly working MP and not one with bugs , bottlenecks and errors. I don’t talk about the BETA but when safex launch the MP must be perfect or it will end up in a fiasco. So please don’t rush and don’t put any more pressure in the team. Looks like they are close. Thanks.

The real issue is this means another black friday will go by without a marketplace. If we aren’t testing it yet it won’t be ready for shopping this year.

See what Athan says above your post, just let the team work, little over your head I bet. The real issue is your negative attitude predicting what you think won’t happen and even if it doesn’t better to be complete than rushed.