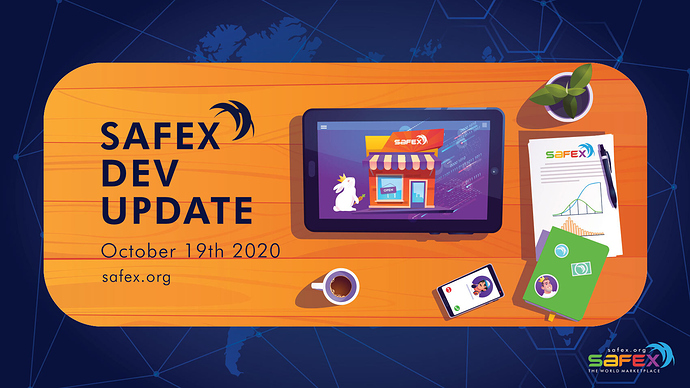 TWM Wallet
Last week saw a continuation on the design side of the wallet and so far it is at around 25% completion. Daniel has been setting up the wallet project to accept the merge of the new routes for browsing items, for registering with an API, and for messaging (shipping, or open dialogue or both

) This merger is being worked on together with the designs since some aspects of the layout are facing a bit of adjustments. We’re glad to see the wallet progress to this point of choosing colors and placement for the final elements.

The API will also be visited this week with new endpoints published for registering and making messages. This is all coming in after the merger of the new decode_safex_ouput route that was added to safexcore so that we developers can get a perfect parse of data pulled from the blockchain.

These updates are moving ahead quickly, and we are focused to release them for testing, and we will do so ahead of the finalized design implementation.

Stagenet 2.1 | Safexcore and Wallet Updates
Igor was engaged with a few tasks during the last week and the previous week. He went through clearing all build warnings. Also, Igor merged the decode_safex_output RPC call to the Safexcore node software, this enables developers to be able to send the raw blockchain data of an offer and receive back a fully parsed output of the data inside for easy consumption across the development platforms that are out there.

Additionally, Igor addressed an edge case in the wallet where if you try to purchase a product but received many small amounts, and the purchase would then require many transactions to complete. This occurs for people who are mining since the rewards come frequently and are small. Igor changed the way that the wallet selects Inputs for a purchase transaction to better selectively choose and complete the transaction.

Igor is also merging a testing suite that audits the feedback mechanism and it is now fully covered with tests and ready for release. He also added a new test proving Safex Token’s double spend prevention. While doing so, Igor updated the wallet to improve the sweep_unmixable command for tokens.

Safex Documentation
Daniel and Igor are working in tandem to sort out the official Whitepaper for the Safex Blockchain and the Marketplace and they are expecting to have a first draft ready this week.

Exchanges
Our team is actively pursuing exchange listings. We will be in touch with the community as things are developing further.

Thank you for reading and tuning in. The team and development community truly feel and are on the launch pad preparing for this marketplace launch.

Hi everyone. I found this Safex project very interesting. Any expected time frame for official launch?

No date is yet set, but the team is working diligently to get everything ready for launch.

Best bet is to follow the weekly updates each Monday to see the final pieces fall into place.