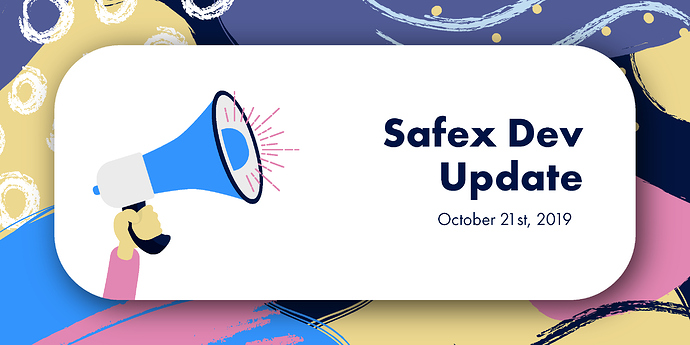 Marketplace
In the past week was a continuation with the safex_offer creation and edit functions and these have been wrapped up and are functioning in the command line interface. Also last week it was completed the functionality for retrieval of offers from the blockchain is handled so it is now possible to pull the list of offers that are available.

safex_offer create so let’s put an item into the blockchain for sale: DallysTeacup

Further, Edoardo and Igor had begun coordinating these new transaction types to be included in the golang module so that we can integrate the marketplace features into the graphical wallet, as well as deploy any services related to the marketplace aspects such as account creation.

Additionally, Igor fixed some unit tests that were incomplete, so far all unit tests are now passing as a result of this wrap up.

We also had further planning in the flow we will take in order to fulfill an offer which will continue this week, where we will implement the purchase method. Part of this is a recap of code we had produced and delivered in May: the demo purchase and the rev share system. We will now need to adapt it for the safex_offer object we just completed. With that we will conclude development of the v1.

Sails Wallet
On the Sails Wallet we’ve completed the most of the Bitcoin/Migration aspect integration. Most of the code is now structured adequately to complete the features for safex transactions. During this week we expect to move back to safex transactions and lead to complete the basic implementation of Bitcoin/Migration and Safex Blockchain interactions. This will allow us to focus on the marketplace feature integration. We have set a goal to get into the next steps in this week.

Also during the last week the bug in the transaction calculations was addressed completing the feature requirements that lead to the marketplace transactions. There remains a bug that causes the module to suddenly shut down while it is in use, so we are now planning measures to address this issue.

Migration
The next migration script will be run October 30, 2019.

Livecoin
During the last week we received feedback on our patch that suggested the bug we suspected is what is present. The wallet calculates twice a balance, and then crashes. This is the case when wallets are sending transactions to themselves. This was a bug also found in the monero rpc, and it is now addressed. We will publish this latest patch tomorrow and we hope this will conclude the issues that livecoin had to face with the rpc. Not all implementations face this issue, nonetheless we appreciate the patience of the affected while we cautiously sorted this issue.

Mining Algorithm Update to RandomX
Some time ago it had come to our attention that a large majority of hashing power is sourced from ASIC machines. This means that only specialized participants get a significant advantage over the usual GPU/CPU miners. Since our development resources are constrained while we focus on the marketplace delivery, we did not put this at the front of the line. However, since it is an ongoing issue and one of the members in our development community suggested to implement a new algorithm for our mining that will address the ASIC invasion then we can level the playing field for all participants.

The monero community published a new method for mining called Random X which significantly empowers CPU mining, this makes it very difficult for hardware manufacturers from producing specific hardware for mining safex which gives them a significant unfair advantage over the layman miner. Considering our initiatives to encourage running the CPU miners this goes hand in hand. GPU mining remains a viable alternative even though CPUs now stand a chance.

We are working out a date to make the fork that will lead to this improvement in allowing the community to participate once again in the mining process and acquire safex cash alongside eachother. Next week’s update we will include developments from this side.

Lovely, “just do it”

A post was split to a new topic: Migration Help K,Wojciech 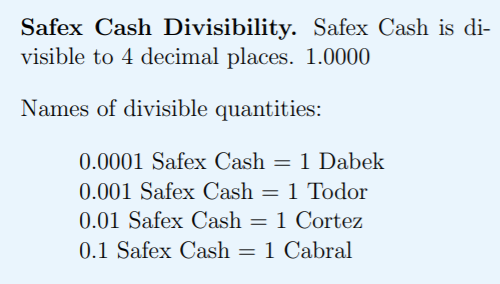 It was indeed changed to 10 decimal places.

Thanks for your swift reply. When was this decided, if I may ask? (link?)

Before blockchain was launched in 2018.

No idea if there’s a link to the decision anywhere.

It’s set to 10 dp, but the minimum fee charged for a transaction is within 2-4 dp, so even if it was split to anything lower than that, you wouldn’t be able to transact with it.

@dandabek can you please clarify the following: if fulfilling an offer is the last work remaining before v1 release, does it mean that user feedback, seller reputation, product search and private chat between buyer/seller are all features not included in the initial MVP?
Are these features planned for v2 of the marketplace?
thanks!

These are blockchain tasks, in the marketplace section I discuss primarily the production related to onchain events.

These are second layer, and therefore far simpler features to incorporate since they are not protocol they can be handled externally.

Are these features planned for v2 of the marketplace?

These features are planned for v1