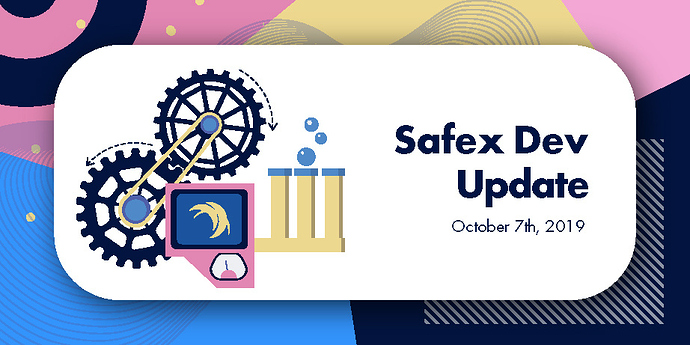 Marketplace
The Safex Offer continues to be in the front and the center. Last week Igor and Marko connected the safex offer object into the general flow of the advanced outputs system. In order to store the sell offer object into the blockchain it must go hand in hand with a transaction, and that transaction must be properly interpreted to be accepted. So, the team worked on the storage of the offer and transaction information.

This is coupled with further tests as part of the development. The next major milestone will be when sell offers are coded into the cli wallet and usable without code manipulation as is done with the testing suite that is coupled with the feature.

Sails Wallet
During the last week Mirjana continued to optimize the application to accommodate the Bitcoin and Migration system. So far we are now listing the bitcoin addresses as we did in the previous wallet. The fundamental difference in this version will be the individual address exists as its own component so that we will be easily able to refresh on a per address level such as after making a transaction, and especially when loading the wallet.

The current experience is that all balances will load before the wallet has loaded where as now each address will load individually making the success of loading more certain and less clogged network upon the loading moment.

In the goland Edoardo continues to clean up the module adding logging to all function calls while refactoring commits from the merger of the transaction formation pull request that Stefan had worked on. This overhaul of logging will make life very good for debugging issues that will arise for whatever reasons in the wild.

Migration
During Friday the omni node that services the wallets and is a part of the migration process tripped an edge case bug in the omni client. This required a startclean command which took approximately 12 hours to address. This delayed the execution of the migration scheduled for October 4.

Livecoin
Last week we received feedback from the livecoin team and revealed that the issue was not related to subaddresses. However, due to the increased logging visibility we included in the previous patch let us see to a great degree what the issue is.

So, we published a subsequent patch released in 2.0.2 which touches on the issue we’ve identified and if not addressed here further logging will pinpoint the exact lines of code that are causing this edge case in the wallet-rpc module.

Glad we’ve made progress on this matter and the good communication from the Livecoin team.

Safex Cash Trades Live from Crypto ATM
On Thursday, Daniel gave a presentation that included a talk about Safex and why it matters, followed by his walkthrough of xcalibra exchange. This presentation concluded with a live demonstration of him buying Safex Cash with Serbian Dinars and then selling them and getting those Dinars back.

This event was streamed live on twitter so you can see crypto history taking place as it happens.

It’s been a momentous week, and the team is set up and energized to deliver more breakthroughs this week going forward.