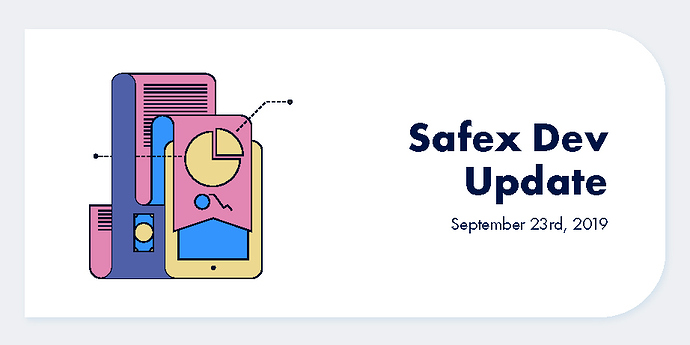 Marketplace
During the last week Marko had created the sell offer definition, which is the start of the methods for the blockchain to list items which others can buy. It is instantiated with the first part of the offer object which Daniel had proposed the week before.

Also we have been onboarding additional developers to the core of the project during the last week. One of whom has been actively studying the codebase and ecosystem for six weeks prior.

Furthermore, last week Marko linked up the token locking as part of the account registration to the codebase and added additional states to handle errors.

Sails Wallet
Last week Mirjana started to refactor the code she has already written. During testing the speed of the wallet loading was slower than excepted. There are some redundant network calls that cause the wallet to take more time than it needs to when loading. These are being addressed in the refactor.

Also some architectural adjustments are being made to the way the application works by introducing some additional frameworks that will also help in optimizing the performance of the application.

This week we will be getting into the Bitcoin and Migration part of the application. We expect this week to merge these aspects ahead of integrating the marketplace features that will interface with the world marketplace router.

Edoardo continued with the refactoring of the go lang rpc. He continues to add logging where ever necessary to have a full view on any hiccups from the wild which will allow us to address the issues with a better understanding on what the problems are: such as in the case of the blue screen issue, since the module we used did not include proper logging we were not able to successfully diagnose the issue. Luckily we have a new and well made module in go lang.

Remaining tasks are related to transaction history: to have an in depth view served to the GUI once they (the transactions) had been parsed from a block.

Migration
On September 21 was the previous migration script run: ~13 million safex tokens were migrated on that run.

The next scheduled migration script will be executed on October 4, 2019.

Keep doing it!
Support to the team in this crazy times!
We believe in the team and will support you as much as needed.

Thanks for the update but I’d suggest now to add code snippets in here, github is a better place to publish code

It would be more useful if you could share the list of outstanding tasks to complete ahead of the initial release.
keep up the good work!

This might be your worst update yet since you started posting those useless updates. At least when you started this, it looked like you did care and that you were trying. Now you just post random stuff cause you feel you have to. It’s not even coherent anymore. Reading this is just a waste of time.

How the hell can anyone know where you’re at with the marketplace development with that useless copy paste of that useless piece of code?

Say what’s done, what’s left to do and when you expect to be releasing something! Then your updates will be useful. But even you did that, it would be full of lies anyway.

Then what is your reason of reading updates since you are confident that it is useless or it is (will be) full of lies ?

@gale That is called: FOMO

Do you have an internal, more detailed Roadmap? I mean honestly it could be the first or the fiftieth update, I can’t really put it together, because we don’t have a coherent overview of what exactly is already done, which are the next steps, how many steps are there left… I mean it’s kind of a mess from an outside perspective. I believe that you really know what you are doing, but communicating that to the public is a task in itself. And it is important and must be done right. That is part of marketing as well…

Yesterday I posted this on Safex Open Talk
“In my opinion, they fail (dev updates) to communicate a proper idea of progression, we just bounce to one thing to another not knowing how much is actually left. It’s kinda frustrating to follow honestly. I think that dev updates should interface with a new roadmap, a more detailed one.”

There is too few tasks remaining in this sprint to stop and start developing a detailed roadmap.

I hesitated last year from making development updates since there will be times when it is not clear to the outside what hiccups happened that need more attention, or when someone got sick and had to take a break and come back the following week to wrap up a task from the week before.

We have sell offer which includes feedback and price peg remaining to embed in the blockchain.
Once those are implemented we are v1 ready.

It is easier to communicate in this stage with developers who are willing to open the code and read and understand our pattern and where we are at. The real gift is the invention of the smart contracting into the safex blockchain to execute the marketplace features. That is already evident with the rev sharing which was demoed in May and with the account registration which tied up last week.

That is part of marketing as well…

I remember about two months ago, there was an audio posted here about marketing starting “soon”. Does anyone know what happened and why the marketing never happened? Maybe the marketing people could take over the weekly updates so that us regular people could understand what’s going on.

The marketing people would be headed up by @Rich.bate

Marketing has started. Just because you don’t see it, don’t simply assume it hasn’t kicked off.

Try looking in the 16 September update. Not sure how much more clearly it could’ve been stated, tbh.

Again I think Dan started these updates to keep the community happy, Sending a report every week seems quite a good idea at the time, but this gets boring after a few weeks because we don’t understand the day to day running of Safex. Sure there is a lot happening and to put this on a report is not easy, so given the current situation I would say we are still in good hands. What other CEO communicates so often with people that will probably have no impact on the end result.

Actually, any marketing you or I see is wasted $$, as we’re already brand aware. So yeah, the target market is people who haven’t heard about Safex.

We enjoy providing a weekly update: we are glad to recapitulate our development progress every week making sure we are addressing the whole picture and quality. There are a lot of pieces to the puzzle, and from each update there are several things that can be written but would lose you even further due to the technicality and the context.

One day, we can hire someone who interprets and reports this stuff in as fine detail as possible: likely a worldwide development community and one person collecting all progress on our community demanded features, paying bounties through the platform and have someone who reports all the progress to the us.

The fact I am early investor and getting chrage 1/4 of my investment to move to you new blockchain is enough for me! Why you did not cover these costs instead of charging your early adopters is behond me only care about profit and not your users.

1/4 of your investment? Migration currently costs about $3-4 in total for the 3 transactions needed.

It is cost of bitcoin transaction. It is not going into Dan’s pocket…

If you dont wish to migrate them, please tell us how much u have and I am certain someone on the forum or in Discord will purchase the non migrated coins from u