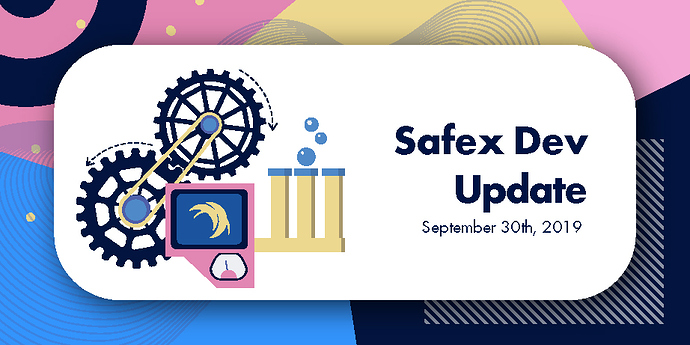 Marketplace
During the last week Igor and Marko have been knees deep in the Sell Offer creation system. This is the heart of the marketplace. Once you make an account you want to sell items: this is that part. This is it.

The team has created the definition for the sell offer and built several tests to cover the feature. This development laid the ground work for this week for the guys to take on storing the sell offers into the database, and extending the tests to cover the whole range from instantiation of the offer to someone sending safex cash to it and gaining that as an order.

Sails Wallet
During the last week Dan started work on the Bitcoin and Migration systems. As part of this he has conducted a recapitulation and code review of the application. He has documented a hand full of bugs and ergonomic issues which Mirjana has been addressing since the middle of last week.

Besides the minor design adjustments, Mira had been continuing to refactor the application removing redundant api calls and positioning the elements of the interface to be arranged in the right place.

Edoardo is nearing the end of the merger of other branches into the master branch of gosafex, he has been restructuring and optimizing the code throughout the project from the other contributors and has indicated that he is completing this task, we expect in the next days which means we can move to utilize the transaction creation functionality and finally add token locking/redemption routes which can be consumed by the wallet.

Livecoin Update
We have received additional feedback from Livecoin using the patch that we provided (this patch provided additional logging so we can diagnose the issue most thoroughly). Based on this feedback Stefan is preparing some additional code that Dan and Stefan both believe should address and enable Livecoin to successfully reopen the wallet.

Pilot - Merchandise
Richard has been looking into multiple merchandise fulfilment companies that are capable of printing t-shirts, hoodies, hats, stickers, etc, on-demand. Historically we’ve been really keen to send out Safex merchandise to the community but logistically it has been difficult without dedicated management.

The merchandising companies we’ve been looking into would be able to print orders on-demand, hold all clothing sizes in stock, and be able to ship worldwide (including you guys and gals all the way down in Australia and NZ!).

More importantly, however, is that we’ll be able to create a simple automation link between a marketplace listing order, and have it automatically pushed to the printery service to be created and shipped. This will make a great case study of applications and usage for the Safex blockchain.

We have no firm timeline on this yet as we’re still qualifying the right fulfilment services with the relevant API services. I would hope, however, that this would be achievable this year.

Marketing - Graphic assets
We’re starting to see a lot of community initiated websites, graphic designs, and related content. Whilst this is awesome to see such initiative, we would like to provide the community with a library of graphic assets to help incorporate more Safex branding/design/feeling into community content.

This’ll include icons, graphics, fonts, and colour sets. Aiming for this to be completed by the end of the week if the designer finds time outside of the main tasks set out already.

Migration
The next migration will take place this week October 4, 2019.

Thanks for the update! Great to see you take feedback seriously and improved the communication of the ongoing process in this update greatly compared to the last one.
Cheers!!