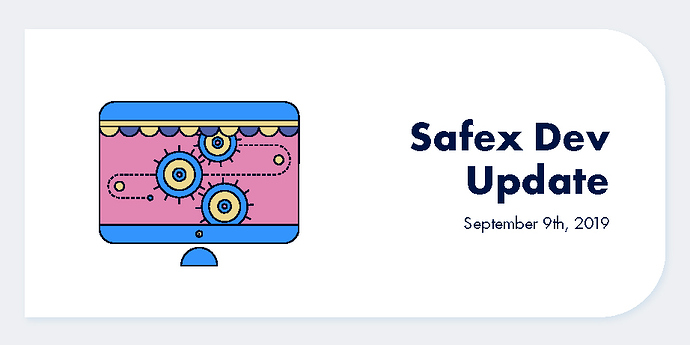 Marketplace
Marko continued with integrating the accounts registration system into the command line interface. The CLI has to interpret outputs the same way the full node does when accepting transactions from a block and allowing them to be valid and included. The same must happen on the CLI.

Additionally there CLI needs to integrate the transaction for creating accounts. There is a special formation of outputs so that an account gets created along with the locking of tokens. Further efforts were put towards improving these functions to handle more cases of outputs.

In the meantime, Daniel has been working on a proof of concept using cryptographic signatures and filesystem to construct the account object, sell offer object, and order (buying an offer) object and enabling them to interact in the flow that is planned for the blockchain application.

This aspect is planned to be present on September 10th at the defidappsday.com event in Tel Aviv, Israel. Where Daniel will also speak about the development and purpose of Safex at the largest blockchain conference in the region.

Sails Wallet
Edoardo continued with refactoring the golang module. He has moved further on the merger of the transaction creation branch into the main development branch. There are still some elements being refactored to fit the general code style of the application.

During this refactoring phase he added tests to fully test all features concluding the merger. “Tests included on the merge front.”

Mirjana began to implement error handling on the application level to handle cases where there could be inconsistency in data for a moment. This phase will ‘teach’ the wallet how to behave in the event of things like, sending a transaction though internet connectivity was severed. There are several cases like this that are handled by the golang module that give indication to the gui what’s going on during each request.

Edoardo will follow the merger with additional features that enable developers to call a more detailed view of the blockchain so that more dynamic and complete applications will be possible for developers. For example parsing the blockchain for accounts, sell offers, and detailed transaction history.

Migration
The migration script run scheduled for September 7th will take place today, September 9th. The next Migration run will be on September 21st.

Marketing - Ad Campaign
We were hoping to start the display ad campaign last week but a few logistical issues came up which shifted the launch date to today.

As mentioned in last week’s update, we’re going to be trialling a crypto-focused advertising platform that will get the Safex brand seen on all the major and minor crypto news/blog/info websites.

This first campaign will be a test, and we will adjust parameters and scale up coverage to ensure we’re making best use of funds.

Marketing - Content Campaign
Last week we started a new Medium account to post some of our “conceptual” content efforts. The strategy behind using Medium is to expose our platform to people outside of the typical “crypto” community.

Medium is an excellent platform for us to expose our content to people outside of crypto. The typical audience is the most suited for the solution we’re providing.

In fact, within the top 10 most discussed topics on Medium, there are at least 7 topics that match the perfect early adopter of the Safex marketplace - Entrepreneurship, Technology, Startup, Business, Programming, Ecommerce, Privacy Matters.

You can’t think of a more ideal early adopter group than that!

Don’t forget to follow us on Medium and throw some “claps” our way when you see an article published! Every “clap” helps our exposure efforts.

Website revision
We’ve identified a few areas on the website that we would like to update. This is also to bring it in line with the upcoming marketplace launch so that everyone has the relevant information needed to get involved.

This will be handled by @rich.bate UK team and are currently in the process of build-specs. More info on this as/when it progresses.

UK team
Talking of the UK team, Rich has established a remote office in the UK to supplement our marketing and development efforts.

There isn’t much to say on the subject right now, but it enables us to now open up to some incredibly talented designers, marketers, and developers that we might not have had exposure to before.

Rich has been busy interviewing, recruiting and on-boarding various talents and we will start to see the fruits of this labour in the coming months.

It’s a good time to acknowledge that our contributions scale from around the globe. By now we are developers and contributors from Serbia, Italy, United Kingdom, Portugal, the US, and Australia.

We look so forward to continuing the proliferation of cryptocurrency the blockchain marketplace and free trade around the globe.

Good one, love it

Brill to hear about the uk office, great progress dan, keep it up