It pegged my interest as a software developer, and I was just wondering whether the hiring is done only in Serbia.
Though, I would have to up my knowledge on block-chain development before I have enough confidence to offer my services

Dan mentioned on discord earlier that to join balkaneum you had to be in Serbia.

Thanks for the inf.

I think you should still apply, (reg links open in next days) However team work gets more productive when people are together and develop a personal synergy.

No doubt we will still support remote contributions through a development bounty program.

I’ve heard from some folks here who live in Serbia that Dan is actually renting this huge 10k sqf space to house the people, so I’m guessing at some point he’s propably gonna be bringing in some non-serbians to fill it up.

I’m curious how Safex can hire 20-30 people, are they paying them with shares from the company?

From my understanding the company only kept 1% from the ICO.

Even so, the company would never give out its share, it would destroy its future ability to run the project. It needs the dividends.

It’s possible the company bought some after the ICO, but to hire 20-30 people full time requires quite some capital.

What about the period from now until marketplace revenue can sustain ongoing development?

To the best of my knowledge, Dan is currently paying employees from his own pocket. Unless things have changed/I’m misremembering, he also has some safex set aside to use the dividends towards paying employees. Also, the blue paper mentions that the treasury will charge a .02% fee to support development.

You are assuming that Balkaneum has no other sources of funding. We dont know that.

Hiring 20-30 people requires capital and time. I’ll be totally impressed he Dan manages to hire such a team within, say, 6 months.

That was the entire point of my question

This is my concern. Hiring a team, developing the market place AND launching Safex by April/May just seems unrealistic to me.

More like aim for an alpha blockchain by then. I doubt anyone is expecting the marketplace launching in 8-12 weeks 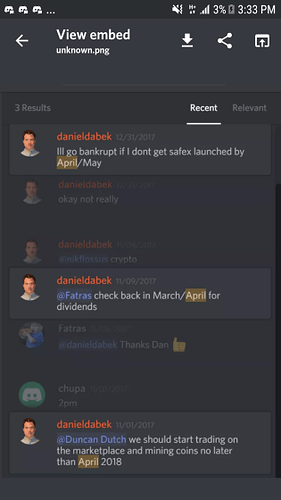 It’s not going to be cheap, but if there’s 25 people working full time the marketplace will come out by then.

But I feel like 25 people is just an excessive number of people.

I had not seen that. Sorry

Oh well, I cannot see how they can launch by April.

That is an… unsettling… comment. It’s not like the marketplace will start raining money as soon as it opens.

More like aim for an alpha blockchain by then.

Dan said somewhere a couple of weeks ago he already had the alpha running.

I wouldn’t take Dan’s comments about going bankrupt seriously. What I know so far, is:

Regarding financing, we simply don’t know how Balkaneum is financed and whether it is 100% dependent on Dan and Safex or not. We also don’t know if Balkaneum developers will be focused 100% on Safex, or if they also have other projects in the pipeline. I suspect there is some additional money involved, but I cannot really prove my claim. But this is something I don’t think we should concern ourselves with too much.

About the deadlines, Dan seems to be targeting April/May for Safex blockchain being operational and market being used (according to that screenshot). That would be great, but I remain sceptical. Even with the new staff (and it takes some time to hire them and get them up to speed), it seems to me like a very tight deadline going from alpha blockchain to the actual release of the marketplace.

Before we get to the actual marketplace being used, the first big objective (and a test!) will be to start the Safex blockchain, successfully convert Safex coins without too much drama, and start mining Safex Cash (+ airdrop). For me, if this can be done by end March/April, I would be very happy.

And then, there’s the issue of actual marketplace app design and testing, and related problems that may arise.

EDIT: to add - a workplan I would be happy with (and could believe in) would be:

But feel free to prove me wrong, Dan & Co

Wether it is launching in April or March or next year!
It will rise again and be up there!! Keep up the hard work safex team and supporters!!
It does take a lot of preparation before you fly to the moon!

March next year would be something I could get over… But ONLY if that was the plan.

The plan seems to be April/May, and if that doesn’t materialise then the project will suffer a loss of credibility.

I am a believer in Safex but the project doesn’t seem to be on an organised path to implementation.

Balkaneum only has 1 job opening for a Blockchain Dev. So that takes the backend team from 1 to 2…

Would love to see a roadmap even if the reality is that we are 6 months from a working product.

I think we would all appreciate to see an updated roadmap.

Btw, how do you know they are only going to employ one developer? They can employ multiple people under the same position announcement.