Crowdfunding IMHO is nothing different from posting a product on a marketplace, except that it has a pledge goal/end date and backers. So maybe crowdfunding campaign could also take place on the SAFEx and look like this: 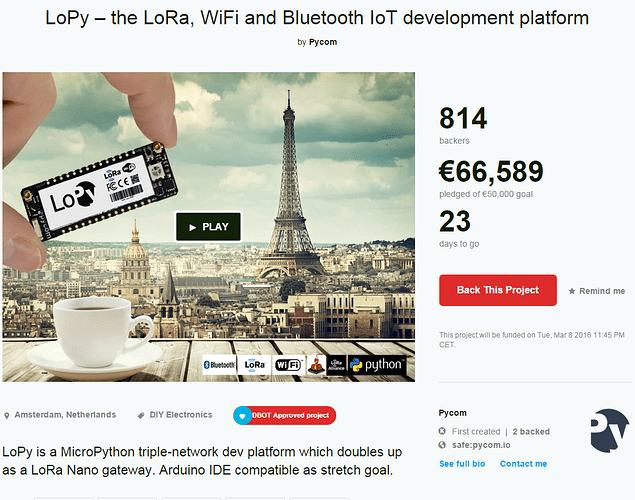 But how do you protect consumers from scammers in a decentralized marketplace? I think the only way it can be done is through total transparency. When you’ve reached your pledge goal, backers should be able to vote on something you want to do, before you can do it.

For instance I still got the idea and wish to make a total transparent opensourced phone.
The way this could be done is as follows.

== The idea is to first make the Phcne prototype, if people like it they can preorder it and if we have enough preorders we’ll have the Phcne made

=== In this scenario 100 people would each pay 100 euro’s to get 1% company share to have a prototype Phcne made. The fun part start when people can send money to a wallet and that collective wallet can also become their cashout portal of their 1%.

Maybe along the lines that the owners of SEC can vote on the creator and the supplied evidence. EDIT: and the backers get to partially vote on the drawdowns too etc. Not 100% because cannot expect the backers to be experts in the invention!

For instance the project you used as an example has a proven track record and actually I backed a previous project and am pleased with them. So I would be voting up the project.

The creator would have to produce evidence of a prototype (which kickstarter requires too) or the “monies” are not supplied.

You could then also do something that is not done for other projects and that is the creator can only draw-down funds based on a supplied funding plan. If they cannot provide a basic budget then should we trust them with all the monies at once anyhow. Of course there would be room for movement and profits if money left over.

This means that the creator is more accountable to the backers and if project stalls or fails then any moeny not drawn down can be returned proportionally to the backers.

The monies collected are held in escrow until drawn down.

Effectively this makes it more like contract service on the inventors responsibility but for inventions, and still crowdfunding for the funding and the backers protection

For instance the project you used as an example has a proven track record and actually I backed a previous project and am pleased with them. So I would be voting up the project.

That would be a good thing for the comapny’s reputation & community feedback.

[quote=“Rob, post:2, topic:158”]
The creator would have to produce evidence of a prototype (which kickstarter requires too) or the “monies” are not supplied.
[/quote]I don’t totally believe that something needs to exist before I should be funded. In the Phcne example above, it’s just 100 shareholders coming together to fund a phone that will be made by another company who can make the phone. In projects like this the starting point should be transparency & proof.

There was this incredible bitcoin crowdfunding platform, they had incremental funds release after that a project was successfully funded. If devs would code up a Youtube, they would be funded after they made progress on the code. Even better would be an app that can check if the code does what the crowd requested and after that release the funds.

I think a crowdfunding option will just give SAFEx more weight, not that Ebay decentralized is not already powerful, but the idea that you only need to add a few lines of code and a marketplace can also become a crowdfunding site could help.

When you think of things like equity/loan it could get interesting. Services like bitrated.com are really a welcome in this environment.

For the Phcne type of crowdfunding then you would describe it as a venture, a research project to start with then crowdfund the production.

The research project could be mapped out and funding in stages from the backers.

So then the prototype is not meaningful till the production crowdfunding

But really the Phcne is at the stage of getting “shareholders” not really crowdfunding. But no reason that the safex version of crowdfunding could accommodate this style of thing. Actually it is a great fit. Use SAFE SDs to produce certificates of shares and safex to exchange (buy/sell the shares OR just to buy them)

Crypto Crowd Funding is becoming more popular these days. But each project has to create and “manually” distribute their tokens. I wish we had a way to “automate” the process and make it less expensive. Right now we are using the Omni Protocol to create altcoins… and then list them on Poloniex or Bittrex.

1. Token Creation
I dislike Omni’s SPT (Smart Property Token) creation & double transaction fees. But it’s one of the few tools we have to create and trade our own coin.

I would happily spend Safecoin to make my own crowd fund tokens. If you guys are listening, I’m telling you how to make Safecoin more valuable.

2. Exchange Trading/Distribution
I dislike exchange fees. But its one of the few tools we have to trade crypto. There is also the issue of getting them listed. Once again, we must give up control to a 3rd party, and when that exchange goes down, gets hacked, or simply delays our funding, we are SOL.

Sending altcoins from an exchange address usually results in lost coins. No matter how many times we tell people not to do it, it keeps happening. I think SAFEX has an opportunity to change the process.

The more I think about the way SAFE decentralization works, the more I realized we are the next generation economy. We will have bumps along the way. But I’m very excited to go on this journey with all of you.

Yes @dyamanaka That’s exactly where this is all going. You can make a token on the fly and sell it for anything else you want. Safecoin other SD tokens.

Yes @dyamanaka THat’s what we’ve been on.

regards to omni tokens, I’ve exhausted what we can do with them. Time to move on.

Wow, I really did miss that post last year. You keep reminding me why I bought SEC.

People will eventually see what we are building, making the SAFE economy blossom!

Yah I think people still were freaked out that crowdsale was happening at all.

The marketcap of SAFEX afterwards should be a demonstration of what people wish that they had contributed to SEC.

Nonetheless I am so diligent we are well flush with funds. No worries pal.

Uhh who bought all the MAIDs at 5000 satoshi?

Maybe i missed the explaination, but in a crowndsale one usually accepts from 2-3 coins to many kinds of coins…

How would you make a big sell block (with the crowndsale tokens) in a book of orders with bids in different coins?

Dan, you said that Safex would have 3 ambients (Data, crypto exchange, “ebay”), but a crownd-sale section don’t deserve a fourth one?

A crowdsale would have you make a crypto coin which you then offer in exchange for other crypto coins.

But don’t you think it limits the conditions of the crownd-sale?

For instance, the SEC crownd-sale. It were accepted MAIDs and BTCs, two kinds of coins.

As you are saying, if i intended to do the same in Safex, it would be needed two book offers, half for BTC and half for MAID…

It would be cool if there was same kind of intermediary, a “ShapeShift” (the exchange section of Safex) layer in the specific crownd-sale.

Other thing, if you just place a big sell order, you are fixing the price of each piece of token… again, SEC wasn’t like that, we knew the final price just in the end of it.

That’s the reason i think we should have a 4th ambient…, you could even place the white paper - paying safecoin for it, of course! - and any other documents of the crownd-sale.

Not trying to impose anything ok?

Actually you could accept any tokens. And you would just need to set the terms of how you choose to price the tokens, whether right away like shapeshift used to do. Or at the end. I think ideally would be that you choose how to account for tokens. Can be at the end (but what if a certain token has no price, like with maidsafecoin crowdsale and mastercoin) In an ideal crowdsale people would put mastercoin and the system would see… there is no buy orders for it in the currency you Actually want… so it would treat them as 0.

But, what if a guy buy it all for 1 buck? Never mind, of course you thought a way of limit it.

In order to do all this in the book of orders there should be a vast ammount of configurations/options, right?

But, what if a guy buy it all for 1 buck? Never mind, of course you thought a way of limit it.

Can’t buy it all for 1$ you have to choose some liquid coin to denominate in. Brings to mind there should be some indicator that explain “if you choose to accept xyz coin, “here is how much liquduity it has”” and you then can decide how to proceed.

In order to do all this in the book of orders there should be a vast ammount of configurations/options, right?

It doesn’t have to be complicated.

Have not yet figured out what to do about timing yet

Thought about another sale option. Split up the sale tokens into 4 groups, the groups do not have to be equal.

So instead of bonus, you have like 4 sales of one week long each. That would potentially create competition between the weeks and some would hold back till the next week to try and get a bigger share of that week, but obviously they wouldn’t be alone. Some might spend double just to “try again”.

Dunno it might encourage more giving. And you could “reward” (in name only really) the early buyers by having 40% in the first week, then 30% in the second, 20% in the 3rd and 10% in the last. The last week might even see more given per token than in the 1st 3 weeks.

Yes, like sub-tokens that in the end melt into one.

That’s what i’ve ment with “vast ammount of configurations/options” for sell or buy orders, one example could be sell orders with a defined set time. They expire in 1 week, for example, TokencoinA. Then you automatically or manually set new sell orders of TokencoinB…

A whole ambient for crowndsale could be built in a specific section for it. There, we could have the original white paper of a project, a mural with all kinds of information such as financial data of what’s going on in the project, payments, hell, even voting for something in that project (please if it’s to much, tell me, i tend to go to far on brainstorming lol). Transparency, all hosted in Safex.

Do you guys remember some time ago of an idea of renting some parts of Safex space - proportionally to the ammount of SECs that a holder has? This 4th new section of Safex would be a good use for it.

Maybe i’m tripping, this all could be a new project like Seeds or PDC.

Keep in mind SEC tokens also will need voting, proposal etc; all basically outlined in the whitepaper, taking this elephant bite by bite.

Is there a xyz coin wallet or platform out there???