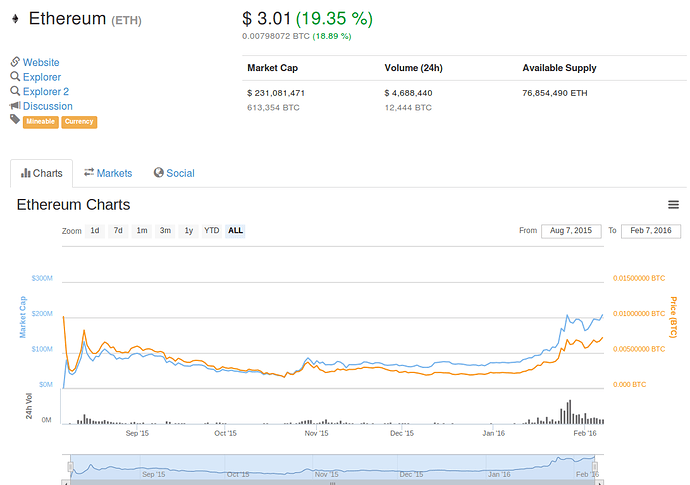 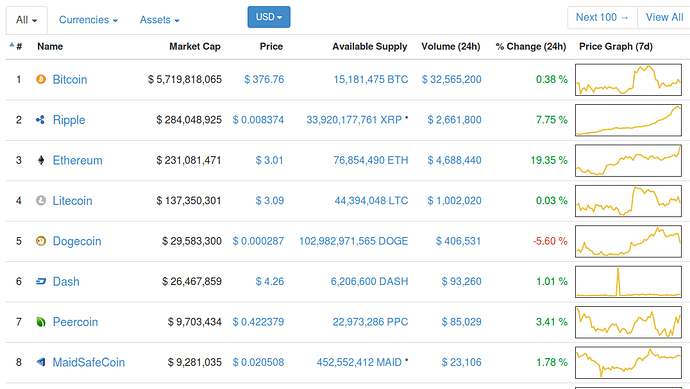 With Over 10% of the traded volume of Bitcoin ‘BTC’

THe orderbok chasing the price = 4500 bitcoins

I’m not the best trader ,) and think if I should long any coin then it should probably be Maid… especially atm… and maid chart is a model of stability compared to ETH and others! :o let’s see… maybe I’ll risk a short when we near a double top

The only trade I made on Eth was at 300k satoshi got out at 640k satoshi my target was 1,200k satoshi but I saw that maid was leave the 4000’s so picked those up instead of keeping Eth

Maid has a far bigger upside potential in my opinion. It has the potential to be at least as big as Ethereum, and is much cheaper at the moment.

However, it’s also a lot riskier, as there’s no proof of concept running, but if you’re confident it’ll work (which I am), it is a great deal!

I have been at a complete loss of where the long term value is in ETH? It has been a little hard holding onto my MAID though.

It has been a little hard holding onto my MAID though.

The two reasons eth is being driven up. 1)new crowd and 2)presale eth on lock down. The new crowd are the people who are just now dipping their toes into the cryptocurrencies waters and were brought here by the excitement generated by Microsoft and IBM interest in Ethereum. Then there is the presale eth on lock down. Those who purchased eth in the presale want to wait until the platform is rock solid or at least a wallet is created that is highly trusted before they unlock their eth and start playing with it. Once the presale eth is released onto the market the value of eth will be cut significantly unless there is a massive amount of new interest in the platform. Slock.it built on Ethereum is going to have a sale of tokens which will be used by their meat space locks. Slock.it claims that the holders of slock tokens will be given voting rights and may vote on the sharing of dividends created by Slock.it lock users. https://blog.slock.it/partnering-with-shapeshift-support-for-bitcoin-and-altcoins-during-the-dao-token-presale-d35b4ce74ea#.emckhuc3q 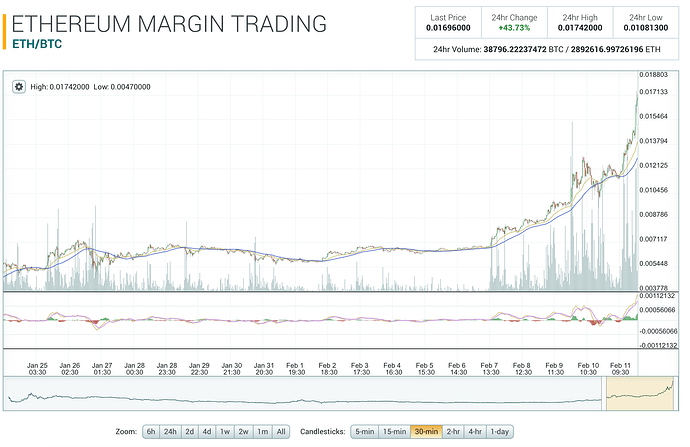 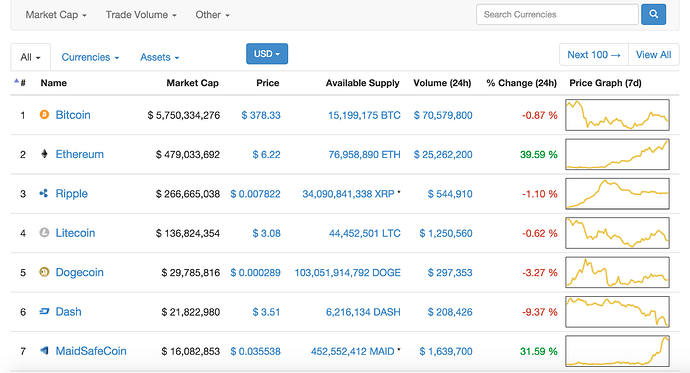 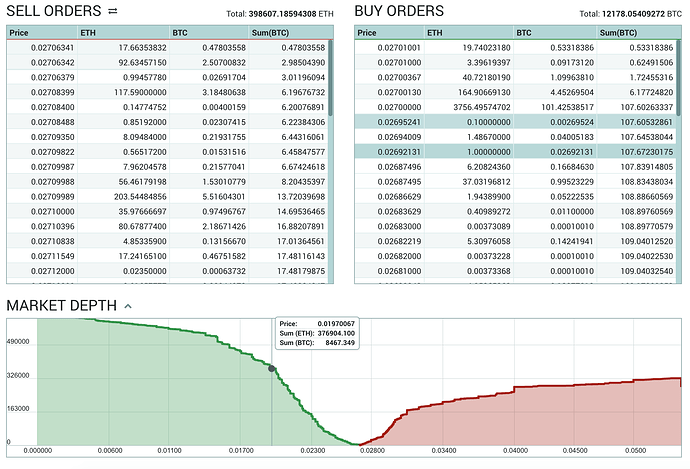 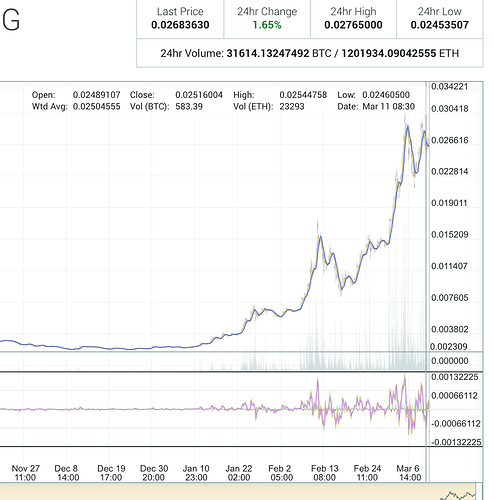 an update on an eth/btc snapshot;

uh… hope no one was selling MAID and buying ETH

Not a question of loyalty, but really what is ETH worth at all in terms of tech idk, does it make sense to use ETH not at this time; so to even invest in it?

I am doubtful of that. 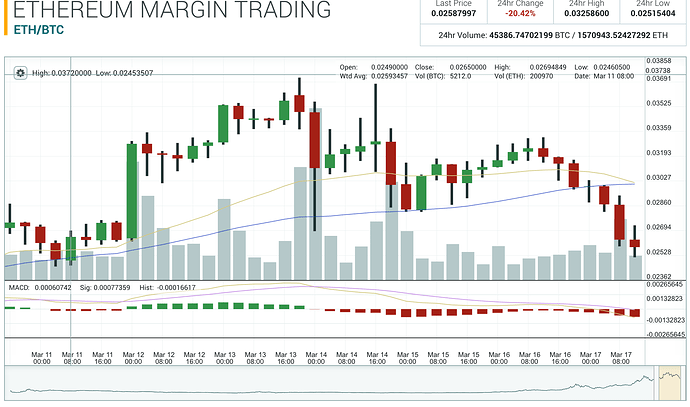 def no MAID selling by me ! but a touch of spot ETH just to ride any short term hype… ,)

My rationale for buying ETH at 300k satoshi was simply that it hasn’t hyped yet. After that I’d rather own more MAID and I’m glad I did because after that time in ETH, MAID has never been the same again, and puts us ahead 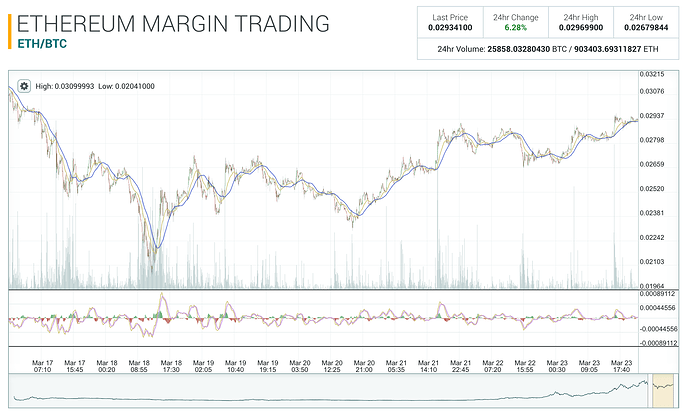 After the sale, will the startup dump 2,000,000 ETH or potentially just hodl it?? interesting dynamics to observe, and will people dump eth to buy the DAO? could there be a closed period on the DAO tokens where you can not trade them? It also appears that they are a limited sale, so once 200m tokens are sold, it’s over.

That commentary from yesterday was news, since then price pulled back almost 10%

ETH might be topped out for now at this point: 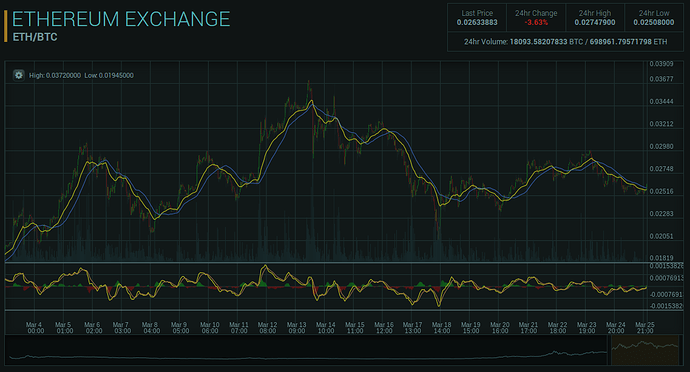 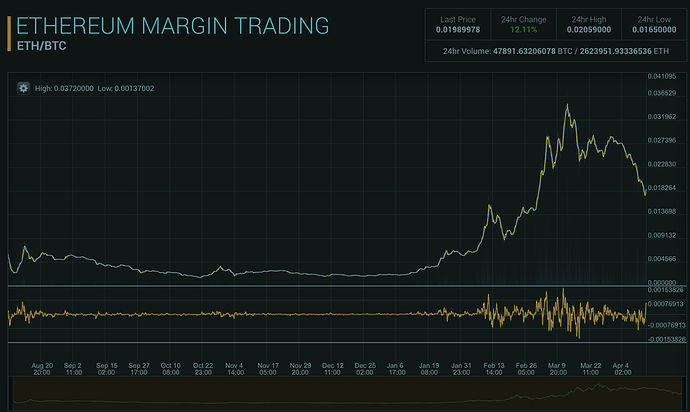 People say MAID follows ETH, I think that’s going to become the opposite. Since today, MAID was up first. Then ETH and everything else followed.