). I’ve been reading a lot of message on this forum, but I can’t find anyone with the same problem.
If you could help me that would be great.

In the bittrex wallet, I click the withdraw “-” button next to SAFEX, I drop my receive adress generated from my SAFEX wallet, select the total amount to withdraw (16000+)
there is this note:
“Do not withdrawal directly to a crowdfund or ICO. We will not credit your account with tokens from that sale.”
(does that mean I can’t send it directly to my SAFEX wallet ?)

So, I click on “withdrawal”, I get on the “confirm withdrawal” page, where they ask for the adress again, and this time, I can’t drop the adress, I can’t type it, I can’t type anything ! It seems to be blocked !
I’ve tried in different browsers, it’s the same.
I’m verified, and have withdrawn other cryptos succesfuly from Bittrex before.

I’ve sent them a request, and updated it every day without any answer (except the automatic response) for 5 days.

I only bought SAFEX on Bittrex, and never before, could this be the reason ?
Do I need to send them first to another type of wallet?
Can I send SAFEX to any BTC adress (other than safex wallet) ?
Is it because it’s an ICO (is it really?)
(my Safex wallets seems ok with the 2 greenlights)
Is anyone having the same issue ?

Thanks to the help of nobody on Bittrex and this forum,
I probably lost all my SAFEX !
I still couldn’t type a safex adress for withdrawal, so I tried a BTC adress, as I read somewhere that safex could go on any btc adress (but probably didn’t understand it right), and this time I could type the adress and withdraw, so I did…
Safex coins all gone from bittrex 16000+, and I got 0.06 eur’s worth of btc to my btc wallet ! Great !!!
I’m so pissed right now

Thank you for nothing

Try going to https://omniexplorer.info/addresssearch.aspx and copy/paste your bitcoin address in the search bar. Until the new blockchain is finished safex is “riding” on the bitcoin blockchain, so it’s most likely just displaying as bitcoin in your wallet since it’s not set up to display safex.

thank you johnpipes,
I can see them on your link but not quite sure if I’ll get them eventualy?

Yes, where it is ahowing “SafeExchangeCoin 0 16183” means that they are at the address, but they’ll be shown as bitcoin in other wallets that are not set up to show safex.

You should be able to copy your bitcoin address that you sent them to and paste it to the safex wallet where it says something about importing an address(I’m away from home, so I can’t read the exact worsing atm).

Thank you so much for you help.
So I would have to import the btc wallet to the safex wallet, that makes sens.
thank you, gives me a little hope.
but the (real) btc would appear on the safex wallet as btc ?
It’s on a nano s, not sure how to get the master key from there, but I’ll research that…
thank you

Whats amazing is that NXT is having an airdrop and Bittrex is supporting yet they giving Safex a hard time.

Please someone help me.
My safex are on my btc wallet on my nano s (I know they shouldn’t be there, but they are)
I want to export this wallet to the safex wallet, it looks a bit complicated to me and I don’t want to make a mistake…
can you help me ? or do you have a link to an easy tutorial ?
I also have eth, bch, btc on my nano S, don’t want to loose them either…
I don’t know what to do

Not sure how a nano s works exactly as I have never used one. I would imagine there is a way of viewing the private key and then importing that private key to the safex wallet. Remember don’t share a private key with anyone.

Update, had a quick look online. This may help you find your private keys, only follow these steps when offline.
https://ledger.zendesk.com/hc/en-us/articles/115005197905-Restoring-your-Ethers-ETH-or-ETC-without-a-Ledger-Nano-S

thanks for your help.
I only have my 24 words passphrase (1) for the 3 wallets (btc bch eth), which is strange in my opinion (but I could be wrong).
I think the safest way is to buy another nano s (or else) transfer all the cryptos on it, and try to extract private keys with safex on it.
But I’m not sure if it’s safe, I can’t find the solution.
Do you think that if I send all btc to another nano s, the safex coins would still be on the emptied wallet ?
(because they don’t appear and the value was 0.06eur’s worth of btc when I 1st sent them there) (but they should be there cause they appear on omniexplorer)

I would imagining that you need to find out the BTC private key on your device and import that key into the safex wallet. I don’t believe you can send safex from the device itself, so sending the BTC to another device would have no effect on the safex.

This may also help you: 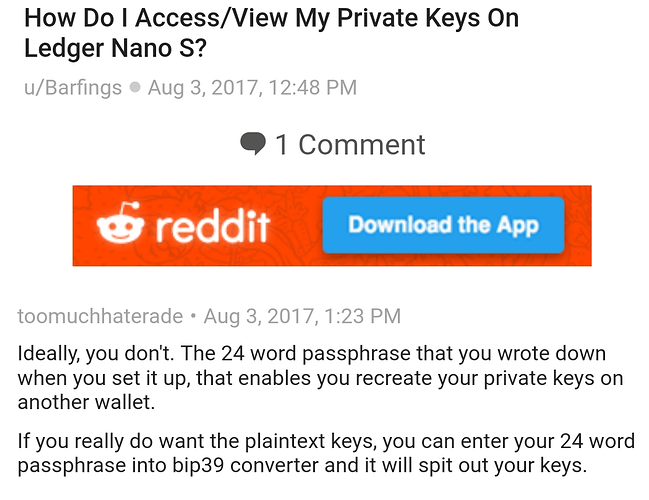 I hope so, I will probably leave a small amount of btc just in case (maybe they need to be attached to a very small amount of btc, I don’t know?)
thanks again !
I have a question though:
So with the SAME 24 words passphrase (BIP39), I can convert it to 3 different private keys (for btc eth bch in my case) ? Is that right ?
The passphrase is connected to ALL the different private keys inside the nano S ?

the best video I found, but doesn’t explain all
https://www.youtube.com/watch?v=zm52kUVuC0k

Im not sure how you put SAFEX in nano s when nano s does not support SAFEX?

The Impression I got was that the one passphrase gives you all your keys. Only one way to find out

never used one before so I can’t say from my own experience.

It doesn’t appear but it’s there, on the btc wallet.
It’s a long story how they ended there…

Try sending them to your public key in your safex desktop wallet, buy try with small ammount and see what happens

You can send btc to the safex wallet, so it will probably send btc only.

I almost figured it out, and managed to import BTC (BIP 44/0…)private keys to safex wallet from my nano s via mnemonic code converter.
BUT, now I have another problem: my SAFEX coins are on a BTC SEGWIT adress (in my nano S), and SEGWIT is a BIP 49/0… adress.
I tried to import a private key (segwit bip49) (with nothing on it, as a test) on the safex wallet, then it’s added to safex wallet BUT the receiving adress DOES NOT correspond to the private key !
(and it’ not on the list of private/public keys listed on the mnemonic code converter page https://iancoleman.io/bip39/ )

I’m really trying, but this is driving me crazy !!!

Is there anyone who knows what to do ?
if not, how can I get a hold on safex team ? I’m sure someone can help me there

Better off just sending everything you have to the new SAFEX wallet address, sure you’ll pay like $40 for it, but it’ll save you the hassle.

problem is, the safex coins could still be on the sending adress (not move), if I was sure it would work I’d probably do it