We really do need to ascertain why Bittrex delisted this token. I have emailed them but still awaiting a reply.
I commend the people who are endeavouring to promote this idea (safex) but what of the purported PR firm hired, I see no evidence of their impact if indeed they are currently in the fold.
Furthermore how can we talk about the marketplace when we have seen no evidence of the alpha model as of yet which I would think is going to push back any final product substantially. Like maidsafe this feels a bit like the never ending saga at the moment.
I would also like to ascertain why evidently other exchanges are so hesitant/reluctant to allow this token on their platform.
There seems to be a real dirth of marketing in regards to this market place. I think evidence of that is the slogan “safex the world” it sounds very amateur and I don’t think it has any impact.
Realistically there is no way that we can bring the battle of regulation to the public’s door because the reality is that all sorts of vile and repulsive activities could potentially be occurring within the market place. Upon reflection, any attempts to regulate/police are simply going to cause no end of issues and further the raison d’etre will go up in smoke.
We are at a precarious time right now. Of course feel free to disagree with me as I welcome discourse

Considering this thing has no whitepaper or alpha yet, I’d say it’s been amazingly marketed via Dan’s weekly updates. (The transparency is one of the biggest reasons why I’m long on this project.)

Precarious? I’d go with “exciting” instead… If the blockchain/marketplace does what it’s supposed to, regulation won’t be much of a concern… (and if people use it for vile stuff, that’s on them… not on the project or other people supporting the project…)

We really do need to ascertain why Bittrex delisted this token

We really do need to ascertain why Bittrex delisted this token Um
Explains everything here guess you have been very busy!! 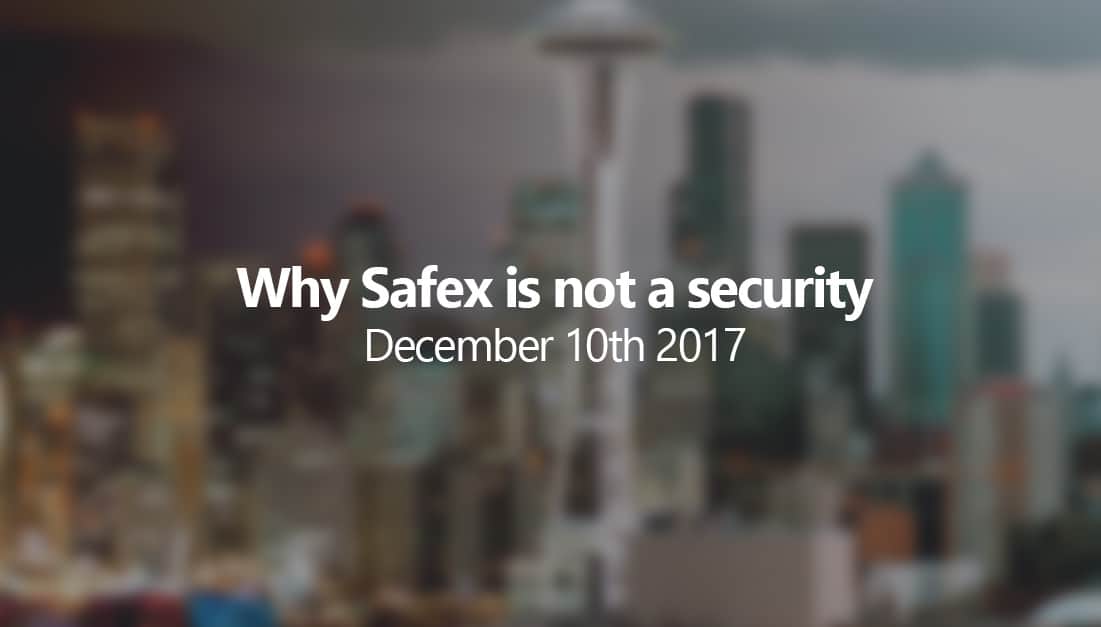 Why Safex should not be considered a security - Safex News

A legal breakdown of why Safex is not and should not be classed as a security. Also further insight to the future of Safex.

Refering to the article:

“2 – A sale of the Safe Exchange Coin is not an investment contract because a purchase of Safex does not constitute as an investment in a common enterprise (shares in a legally registered business entity) and the users of Safex must not expect to receive profits from their Safex holdings based on any efforts of the sellers.”

I do love Safex, but from a personal opinion that explanation “why safex is not a security” sucks.

5 days ago I said here to team up with big 4 law advisory to instilt trust and so that everything will be airtight:

Hello, I’m coming here with a concern my fellow collegue asked me about it when I mentioned Safex to him. I told him, that Safex will grant holders Dividends and Voting rights and that this is a great perk for us. After this, he asked me, so how is this different from “shares” (beside the blockchain stuff) and after that he said that he would not want to invest in this, because it could become regulated, due to this perks. Can perhaps some give some more info on this? P.S. I have a suggestio…

If there has been no statement from Bittrex, then surely my statement is still valid.
If indeed safex has been delisted for the reason you believe, then why hasn’t Neo been delisted?
Anyways, I am still waiting for their response

My thoughts: We need to let go of the American exchanges for now.

Bittrex is large but their track record is deteriorating. There’s a few channels on youtube that have complained of Bittrex not responding to support tickets, sometimes for weeks with large holdings locked up in some cases. Vincent Briatore comes to mind but there are others, you can look for yourselves.

Neo might just be too big to lose for Bittrex and they are willing to risk an SEC ruling while the money continues to roll in. Their executive decisions are inconsistent and that in itself is a risk, maybe even a red flag. Frustration is growing over there. It’s unfortunate that we were not already on other exchanges; it might have reduced the hit somewhat, but maybe not. It is what it is.

I’m looking forward to Cryptopia holding all the volume just so we can put Bittrex behind us and move forward with other exchanges.

Every coin/token is up some up massively gains in the last 2-3 days but safex drops, it is just a scam that’s why there delisting it, last update here was pretty pour to say the least, I did beilieve in safex but after being 50-70% loose it’s hard to see any up side I through it would of went up along with the rest of the alt coins 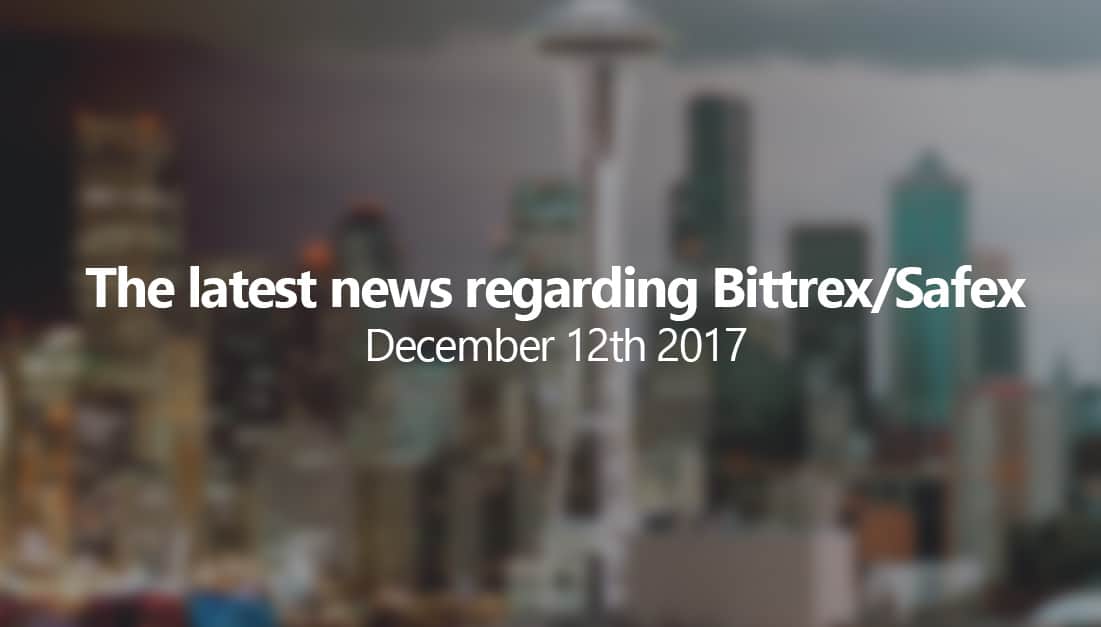 The latest news regarding Safex and Bittrex

The latest news regarding the recent Bittrex/Safex situation. This page will be kept up to date with the latest developments by Daniel and the Safex team.

I’m in the same boat, however not losing sleep over it knowing the issues with Bittrex and this being said buying more!

This is the wild west when it comes to trading. You can’t expect instant reward or gratification all the time. I’ve been in your situation. More than once. It sucks. I get it. In the end, I had only myself to blame because I’m the one who chose to click the trade button.

Most never had a clue that Bittrex would delist. There are risks in cryptoland. We’re all taking risks here because there is real wealth that we believe will be created here. RRSP’s and Mutual funds don’t cut it anymore. The banks & governments take it all. That is why we are here. Be patient. Don’t sell. It will bounce back.

Yes, but Neo is operational and pays Gas. Safex dividend is conceptual, not operational or actually paying. Delist was very premature in my opinion.

There’s nothing to guess on. Bittrex stop IOTA from even being listed on their exchange. And they still did well on binance.

When China banned ICOs Bittrex took a hit. They carried alot of ICOs that have very little trading volume. When volume goes down exchange profits go with them.

So now Bittrex are only looking for highly traded tokens to list hoping to profit from the volume again. My guess is from an entirely business point of view, they just think Safex’s volume is too small for them, and they delist us so they don’t need to do maintenance and support for Safex investors.

Thats exactly what I think to. Thats why they never gave any reason for delisting. The fact they operate like that tells a lot. Also don’t forget lately there have been a lot of complaints against bittrex so in my eyes they are not some elite exchange I couldn’t go without…

People follow Coinbase/Gdax and Bittrex for only one main reason: They are oldest and therefore more trusted.

I hardly think that a 7 million USD trade volume is low when it peaked. That would’ve placed it on the top 50 for trade volume out of all the coins they carry.

I’m looking forward to Cryptopia holding all the volume just so we can put Bittrex behind us and move forward with other exchanges.

No, we need to move crypto-trading to the block chain like Safex is supposed to do for e-commerce.

Or, maybe, Safex can do crypto trading as well? @dandabek throw that on the road map for Q1 2019. Or next week would work, too.

I can’t argue that.

Is there any precedence for trading wallet to wallet privately? Obviously I could send my coin to any address I wanted providing there is absolute trust that the receiving party will hold up there end of the bargain. So has anyone built a system whereby there is some kind of central (I did not say centralized) escrow account where the two commodities meet in the middle clarify they are what they are supposed to be and carry on to the two wallets involved.

I have X bitcoin and I want to buy X Safex from Jim. We make a deal and both send the agreed upon amounts to a wallet address created by the ‘activation’ of this deal whereby the input from each party will only be sent onwards to the recipient once both amounts are present in the wallet.

Does this already exist?

Wouldnt this remove the need for exchanges? Secure P2P trading of cryptos without the middleman.