I am adding some new mining pools to be able to better divide our hashpower over different pools. Currently we have:

Would be nice if miners could gradually switch over and divide over the different pools.
Also it could be an advantage to join a pool that is closer to you, because of decreased pings and time wasted on communication. I think especially for the miners in the pacific and lower asia it is good to switch the AUS pool.

It this runs and people actually divide over pools, next one i had in mind is one in mexico for the entire america’s, … or even one in the US for the northern part and one in Brazil for the southern america.

I’ll watching closely to see how the servers take the load. if any problems give me some time to fix it

Can you post where to put into Miner Configuration to see miners? says add “@miner name” but i don’t know where?

Is this avg hash atm? Not sure why discrepancy in hash when both are exactly the same. 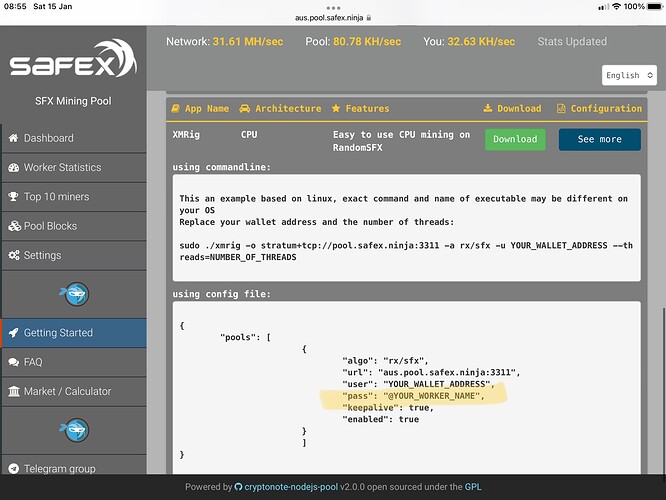 As shown in the config example on the Getting Started page.

There will be a day-to-day variance in the averages, but they should never be as low as your two rigs are reporting.

If you’re using SFXOS, then there’s not much I can offer to assist you in trouble shooting. But if you’re using xmrig, then we should be able to see where things are off.

Some suggestions… are your two ram sticks in the correct slots for dual channel ram use?

That’s what i thought about hash, they were oeprating at 10-11 but have dropped. I’ll turn them off and give them a clean.

Yes, fans are all good. They’ve been running for over a year, maybe reapply thermal paste too.

Mine run at 13-13.5, but I replaced the stock coolers to improve cooling. Plus, living in Tassie, my summer ambient temps are pretty low. Depending on where in AU you live, the middle of summer could be causing your rigs to thermal throttle (reduced hashing) if they get too hot.

I’m in Vic, so would be a bit warmer than Tassie.

December is when the has started to decrease, I’ll see if i can get some better coolers then too.

Thanks for the advice.

Fwiw, I added aftermarket coolers to all 3 rigs, and then as an experiment, bought an AIO liquid cooler for 1 rig. It is performing at 12, whilst the other two have stayed at 13+.

So I’ll be taking the AIO off and going back to the air cooler when next I fiddle with the rigs.

That rig always ran a little hotter (the silicon lottery, I guess), which I why I trialled the AIO on it. But the Air cooler appeared to perform better, all things considered.

Hi, @mynamestaken I had the same exact numbers, the motherboards were so hot under the heat sink it would burn my fingers if I touched it. I swapped out the coolers to Noctua tower type and my hash numbers and payouts went up and were stable. I can now touch the bottom of the motherboard near the cpu, it’s not hot at all, just warm. I reapplied my thermal paste after switching over to the ninja mining pool trying to optimize performance. I learned too much thermal paste is not good, I leaned the hard way!
I hope this helps.

Yeah, you gotta take care with thermal paste, if it’s one of the conductive/corrosive types.

That is why I only use the Noctua thermal paste (there are also other brands that are non-c/c), as there’s no harm done if a bit spills onto the motherboard.

Hey there, it looks like it’s ping is measuring in KH/sec instead of MH/sec, that is if I’m looking at the correct thing to measure ping, I’m not sure, if so I believe that would be less effort per ping.

I’m not exactly sure what I’m looking at all together. I’m lost actually, the ninja pool is showing less payouts per day but seems to be hashing at a higher rate. I only received 36 SFX yesterday where I was averaging 130 on the other pool. I don’t know what is normal. 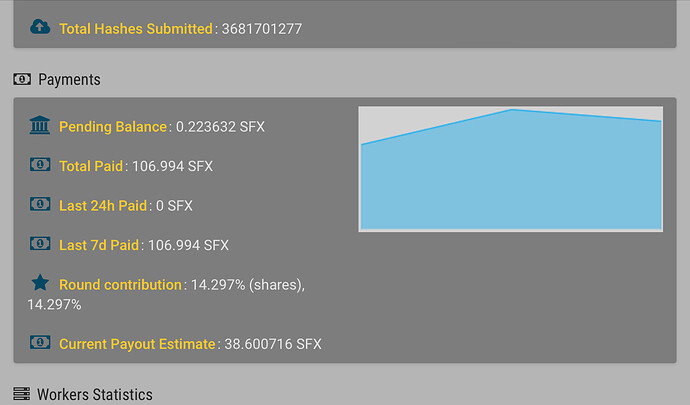 @shazbot Let’s get back some steps back and to explain what is purpose of pools. So, let’s say there are 10000 miners with same hashrate power and you are only one of them. If you mine solo (not over pool) you will have 0.01% chance

to find a block (reward of 270 SFX in our case) and that would mean if you are not lucky it can pass days and days without any reward for you, but if you are lucky you can get reward on first next block (generated every 2 minutes in our case). Pools are here to gather more miners, to increase chance of finding blocks, but also reward is spread over miners. It means that you will get rewards more often and and in similar amounts on day level. But if pool is still small compared to total hashrate, there is still small chance of finding blocks, like it is currently with pool you mentioned (USA one). You can see that on Dashboard on POOL HASH RATE block (percentage in brackets - currently around 0.5%). Why you didn’t received SFX as you expected is because pool was not lucky enough in last hours/days. At time when I am writing this it is 410.1% of current effort, which means it was expected that pool find block long time ago. But also have in mind that it can happen that pool find block with current effort bellow 100%, which would mean that you will receive more SFX than you expected. All in all, in longer time period, average should be the same as on pool you already mined.

Numbers you were pointing are not pings, but hashrate. Pool hashrate is in KH just because it is designed like that to show it in KH if it is lower than 1MH (btw 1000KH = 1 MH). You can check ping by opening console in Windows or terminal on Linux/Mac and typing ‘ping usa.pool.safex.ninja’ . You will probably get some number around 50 or so. That is latency between you and pool and that can slightly affect your hashrate. The closer are you to the pool the lower (better) ping you will have, usually.

All in all, if you stay on USA pool, you can expect more variation in payments, but in average in longer time period it should be the same as on bigger pool like safex.org one.