No longer a challenge maybe

Here it is said:

Contribute to dallyshalla/safex development by creating an account on GitHub.

“Challenges include transmitting a item which requires at least ten minutes to confirm, when done conventionally, whereas the other item (safecoin) is instantaneous.”

I saw that bitgo instant, though we’re relying on a key manager: bitgo.

Not sure if this is a solution. First there were problems with transaction maleability, likely something will come up with a Bitgo Instant. We shall see

There is another way how we can make bitcoin transactions instant: simply change the password of a bitcoin privatekey on the bitcoin network.

Obviously this has a few disadvantages:

How to do this, instant transaction with “real” bitcoins?
As some of us may know, you can import privatekeys in wallets like omniwallet. Well those privatekeys can also have a password on the bitcoin client. If you enable the password, without the password the privatekey alone won’t enable you to send the coins. So this basically means that you have a “minted coin”.

The process of sending a coin would work like this:

The scenario above is how you can move a bitcoin from one user to another without any move on the bitcoin network, besides from the password changing.

r/Bitcoin - Can somebody tell me, why my payment is not confirmed for more...

If SAFEx can enable people to instantly send bitcoins to each other on the SAFE Network, it will be a reason to use it more than the bitcoin network itself. Unfortunately it will only be minted bitcoins, but this could be solved by giving SEC or SAFEcoins as change. 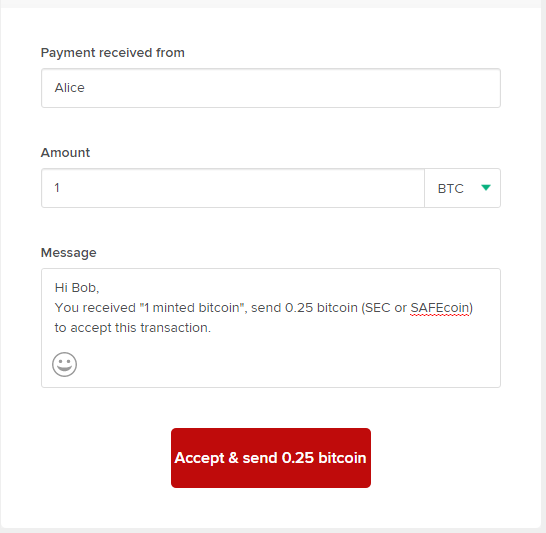 Obviously in this scenario Bob would need to have change in his wallet for the transaction to take place. What if he doesn’t? I’m to lazy to think about that

Another thing is people should be educated how to extract their bitcoin privatekey and they can’t make use of this if they got for instance a Coinbase account.

But there are more advantages: