To maintain formality, I have created a proposal that will last for the next 500 blocks = 3 1/2 days

Voting to accept the change of the ticker.

The process of voting will improve substantially on safex.io website in the near future.

If you want to vote on this proposal and need a refresher how to do that you can watch the following video:

A majority of the participants will determine passage of the proposal.

Can you show the error? We fixed a few cases during the first voting we did.

wow, i’ve formatted a couple months ago and now my windows is 32-bits lol

let me see what I can do right away.

Man, i need a new computer, formatting is not doing the trick anymore

@uqaz I am still attempting to cross compile for 32 bit windows. It’s a little bit tricky, but I may have a solution so tomorrow I will put another stab at this one and hopefully with some results for you

Thanks man, yesterday i almost did it in my workshop place but give up to show my private key there. 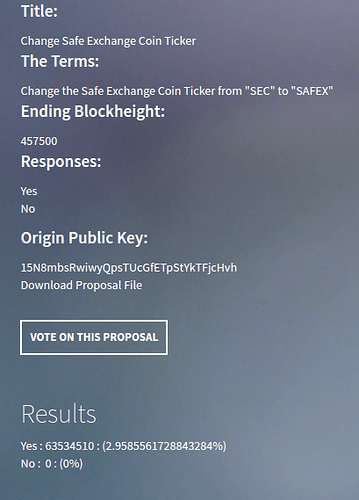 The proposal for changing the ticker from SEC to SAFEX has passed with no opposition. Only 2.95% participation, which I take as a sign that this was a low impact proposal in that it doesn’t not cause a drastic shift. Unlike our shift to building our blockchain solution.

Also in the next couple of weeks this process will be much more user friendly with the creation of a website based voting system… so no more configurations need or downloading software. Also with the increasing number of people heeding my warning and storing their Safe Exchange Coins offline will allow more people to participate in voting in the future.

Coinmarketcap.com is already recognizing our coin ticker as SAFEX!!

Safex is a much better ticker for sure