Marketplace Stagenet Live Demonstration - Belgrade December 7th 2019
On Saturday at the Faculty of Economics in Belgrade, Igor and Daniel bought and sold items on the live stagenet. They presented the safex offer listing and safex purchase features that enable people with accounts to sell items. Igor then bought the item from Daniel’s twmseller account that listed a rocketship keychain to the blockchain.

This was a part of the Belgrade Blockchain Summit for 2019

Afterwards we saw that the listing was set to inactive since its stock was depleted as there were only 1 quantity of that particular item available.

You can watch this as it was taking place live here on this tweet posted by Marija from the Belgrade Crypto Community: https://twitter.com/Belgrade_Crypto/status/1203235759769227264 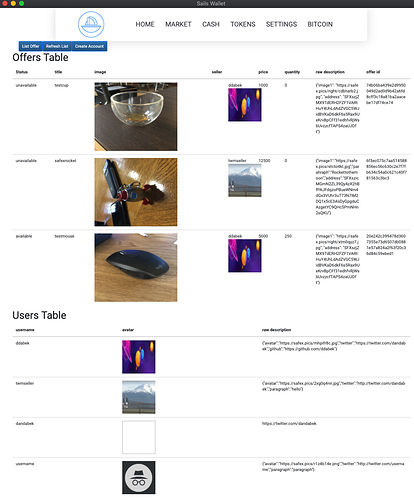 This is a live feed into the blockchain operating on the stage net, with actual product listings, price in sfx, and accompanying information. This is stored and cleared directly on the safex blockchain and a quick demonstration of a visual interface that connects to the blockchain to present this data. Including registered accounts. 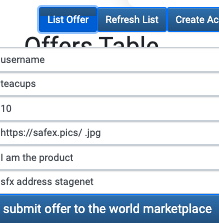 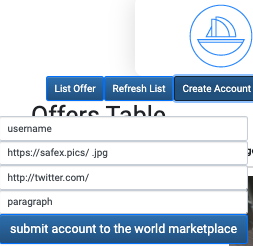 The blockchain system used in this demonstration is being polished during this week for release on testnet 3.

Migration Concluded
The grace period run has been finished. The final count of migrated Safe Exchange Coins into Safex Tokens is 1,641,289,609. You can see the migrated total on the Safex Block Explorer.

We have had the window of migration open for nearly 13 months. And once again huge thanks to @aussiesloth and the entire community who helped participate in making it through for each other.

These are the final building blocks to establish a protocol for buying and selling over the blockchain. Let’s do this.

We are targeting a hard stop on Thursday to bring the development to port and compile binaries which we can all set up and connect to.

Sails Wallet
Last weeks development revealed several quirks in the flow that Daniel and Edoardo collaborated over to resolve. The balance check bug was merged to the main stream of development and the bug related to syncing were resolved so now the wallet is synchronizing properly and consistently.

Here is a screenshot of a fully loaded wallet. The interface is in a development state, with most of the functionality needed, just needs to be arranged smartly.

Remaining tasks to resolve on the gosafex: transaction forming has a bug in signing transactions, and new wallet creation errors out spontaneously where keys are formed though they mismatch.

The Sails gui already is in a great state so far. It is successfully importing keys from the previous wallet version and it is synchronizing with the main blockchain and fetching balances. The transaction frames are left to resolve.

This week Daniel will clean up the development aspects of the Sails wallet code base and upload it to github. With the transactions bugs resolved then we will be able to do some live testing.

Xcalibra.com + Safex Pioneers Giveaway Concluded
The giveaway of $5,000 split between safex tokens and cash to 10 lucky winners is concluded. Lookout for Tuesday (tomorrow) to see if you were the winner.

Thanks everyone who participated we’re really glad to be giving up gear that gets you closer in touch with the world through the marketplace.

Expect more of the like for those who are eager enough to sign up to the newsletter on safex.io an easy way for we to learn more about it and get: free accounts and merchant starter packs that will be available you and anyone who signs up, so let them know!. Stay tuned.

RandomSFX Mining Algorithm Transition
During the past week we’ve seen a smooth transition into the new CPU focused mining algorithm we call RandomSFX. Despite a small bug during some block production events, we have isolated the issue and have prepared a patch to get everyone mining consistently.

From our observations it seems to affect miners using external mining software like Safex-Rig and the various mining pools. In some cases, miners using the native built-in miner (via start_mining command) are less affected.

Whilst we are preparing a patch for this bug, we recommend you just continue pointing your miner to your selected node or pool, and wait out the errors. Safex Rig is programmed to auto-reconnect one the “issue block” passes.

Why not join our mining community in the Safex Discord? It’s been very active over the past week and many first time miners have got involved in their first steps towards mining their own stash of safex cash while helping the Safex network produce blocks!

I’m honored the 1st ever #twm transaction was completed on my birthday!!

@jcasale there is a lot of power behind that bit disjointed display cooked up by engine room developers like us at this stage.

I’m looking forward to engaging our UX experts to make the arrangement perfect.

So glad we are making it, and fortuitous event on your birthday, Happy Birthday!

omg! I’m waiting for this all this times!
It’s not my birthday, but I am 100% celebrating!

could the “subscribe” button on the newsletter signup page be updated to change the cursor from a pointer to a hand to indicate it’s a link? also to provide some feedback to the user when they click it so they know that they’re being signed up after clicking it? it’s currently clickable but it’s not very clear that anything is actually happening once you click it.

Do you have an outline of when we can expect OSX capabilities with the miner and updated wallets?

@caelum https://github.com/safex/safex-rig/wiki/macOS-Build
You could also follow the build instructions and get going with the mining on OSX

once you got it built it is a simple matter of executing:

replace with your safex wallet address, and you’ll be solo mining directly to your wallet.

Thank you @dandabek I am now mining on my Apple averaging 260.7 H/s. Very easy to do with your install instructions. Much appreciated!

@dandabek Can you share how to compile the CLI binary for osx? I have been searching on the forum, and can’t seam to find any details.

@caelum with RandomSFX now included in the official xmrig, try their build instructions at https://github.com/xmrig/xmrig/wiki/macOS-Build

@aussiesloth I have xmrig installed and am solo mining, but I am not clear hot to check my wallet balance. i do appreciate your assistance.

Read through my installation recommendations in…

All Safex Blockchain addresses begin with the prefix “Safex”. This is your public address – the one you provide when you want to receive SFT or SFX into your wallet. Example: Safex5zWHPNQSpWkxtwA5gFvkb7waYfj2LRJWLHo6jSkXpzJ5WUfgBfJWwz7VFQG1oGsYBefCpP13UrfnpZQuM1zN69wZn7Ekbf32 Both SFT and SFX use the same address. You do NOT need to specify a PaymentID when receiving coins into your own address. However, if an Exchange or Marketplace Vendor provides a PaymentID and requests you use it when …