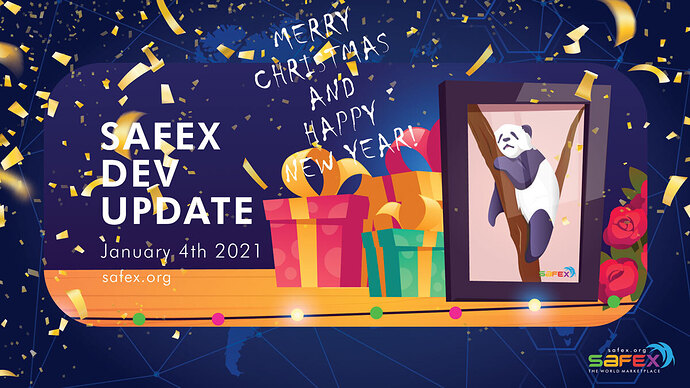 TWM Wallet Update
During last week amid holiday celebrations, the team move forward merging the front end development and the backend development of the TWM Wallet into its final position. The goal was to get everything geared up on staging last week to release today. While the merger went smoothly, several minor bugs did crop up which we’ve managed to sort and get the Staging up today.

So, we will take a round confirming in the wild the API which is now deployed at stageapi.theworldmarketplace.com, and a build is circulating among our testing group community to give the wallet a final test before a deploy to mainnet.

The good news is the coding part is completed, we are making a final pass at testing with a small first group, and the good news is that the wallet will be released for mainnet usage shortly there after.

As a reminder in case you are tuning in just now, you can find the downloads for the Safex Blockchain Full Node and the CLI Wallet as well as the Wallet RPC in the link below, for Mac OSX, Windows, and Linux.

As soon as the wallet is confirmed, we will move to publish for download. Please look out for the announcement on twitter.com/dallyshalla and/or check the forum this week for the release of the TWM Wallet.

You can see this in use, for those privy to stagenet 3 wallet, you can likely load the data there as well.

Is there somewhere spelled out how Safex TWM is/will be different than Open Bazaar or Particl etc.? I am unclear and it would be an obvious question to be asked. THose projects seem to have not taken off well and so how might TWM attract users?
Thank you.

Safex marketplace is a protocol, on the blockchain. It’s functionality is far more advanced, giving it the ability to have a wider range of applications.

Thanks for the update, it’s looking good!

Hurry up, bitcoin is at the new top

I recently saw the below tweet! OpenBazaar users were happy with the platform and looks like they’re trying to keep it afloat, but that may not be possible.

It is with heavy hearts that we announce that
(https://mobile.twitter.com/OB1Company)
will be decommissioning most of the infrastructure powering important parts of OpenBazaar on January 15th. Our donation funds have been depleted and OB1 will no longer be able to sustain covering those costs.

Keep up the good work!

Hey guys, where can I trade SFX? I’ve just figured out that coindeal removed it

More exchanges are in the pipeline.

Is there no pcitures in the GUI?

There are, in this case if you open the offer listing, the pictures are in there