On the forums and Discord channels there has been lots of conversation regarding the distribution and ownership of Safex coins.

Please keep in mind, these statistics are by no means perfect. I’m working with the data given to me from Omni Wallet’s data API. Please keep in mind, many high volume holders store their Safex across multiple wallets. These statistics are based on wallet distribution, rather than individual ownership, which would be VERY difficult for me to work out. 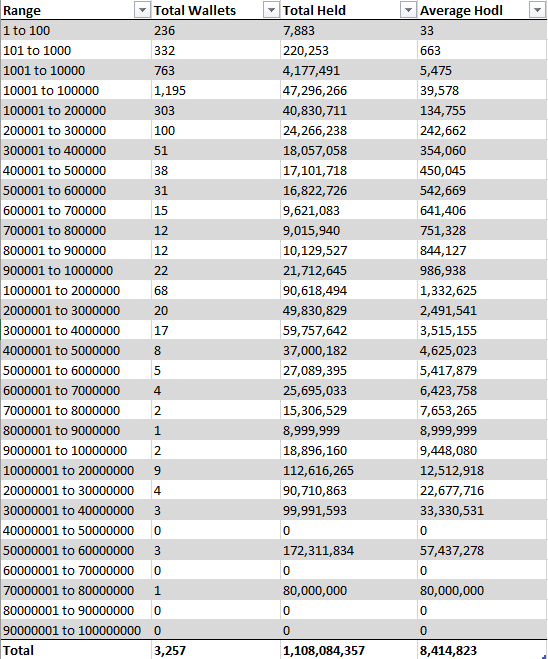 I’m open to suggestions of what other statistics you want to see. The Omni Wallet API is fairly limited, but if you can work out the logic i’m sure it can be gathered some how.

Loving the stats Rich! Thanks for taking the time to do this. Feed me more, more stats!

Rich I mentioned it in the discord, but could we please get a top 100 leaderboard, excluding known exchanges?

Hey, thanks for that.

This is great data, but I’d be interested to know what this means in terms of voting power. It looks to me like maybe the top 50 or so control the market?

@Rich.bate thanks for compiling this data

Would be cool if SAFEX pulled this data & wrapped it with some pie charts & filters. Good to be totally transparent on the website.

It would be interesting to know which coins never moved since they arrived. Also, @ivana can share with us probabilities of lost/destroyed coins.

Thanks for the feedback all.

@SheepWazoo - Top 100 leaderboard incoming, excluding known exchanges (if anyone knows the address for anything other than Bittrex let me know).

@uqaz - easily done. I can add it on the next stats check.

@webber - if i have time i plan to put together a Safex stats type site which has all the fancy visual data etc.

Wonderful idea! It’s great to see how Safex community is growing and how developers cooperate with contributors. As I understood Bittrex Safex holders are excluded from the list? Isn’t it a big chunk of all holders?

Yes Bittrex is removed from any statistics i do. It’s easy to see how much Safex is on Bittrex, and i’ll be closely monitoring how much the address holds daily. However, i’m not aware of any API on Bittrex i can tap into to work out how many individual holders there are within their platform.

First: These people don’t know each other and for 50 strangers to form some sort market controlling entity is very, very unlikely. 50 people in full agreement with each other is already very difficult.

I am very curious to know what will happen with the airdrop and future distribution of the Chille dividends to the accounts of large quantities of Safex which my be lost, forgotten ,etc. A significant number of top 25 holders have had zero activity for over a year, which makes it seem that some of these early buyer have forgotten about there initial investment.

Will Ivana be able to determine if these accounts are still viable, and if not, will active accounts receive the Chille coins which would have been distributed to the lost accounts?

On a side note, it is unfortunate that an exchange like Bittrex would be paid dividends for Safex, as I’m sure a significant supply will remain on their exchange well after launch.

My coins never moves since ICO. I AM Alive!!

will active accounts receive the Chille coins which would have been distributed to the lost accounts?

We will need to consider this from more than one angle in fact, and see how it will affect the launch of the marketplace.

A post was merged into an existing topic: Sending SAFEX from the wallet

This would be great to have an idea about how much no longer exist, but hopefully not too many people have lost their precious safex.

I wouldn’t mind seeing a breakdown of time since last transfer for addresses. Maybe a breakdown of Safex fund percentages moved in the last year, six months, 3 months, week, etc.