can’t send btc on safex wallet? its been locked the last few days, I can not send any btc out. Is this also the case with others? I can receive it.

I only know of being able to send Safex in and out from wallet. I know some bitcoin appears as the Safex sits on the same blockchain. When i transferred Safex i had no bitcoin in the wallet but it autmomatically appears.

I just have a little btc id like to transfer out, but cant, the “send” tab is grayed out. Not a huge deal if its under maintenance or something, just wanted to know if everyones it like that.

I’ve had incoming btc pending for five days. Didn’t want to put in a service ticket until all the other drama died down. I don’t know it it’s a wallet glitch, or a system issue.

sounds like it, im fine waiting just wanted to know if others had any issues.

I assume this it btc to buy new Ssfex. If you see Dans update Wallet update is a number of upgrades in next week so may be impacting. May just be the extra traffic. Search the forum before raising a ticket.

It’s nothing that’s going to impact my life…somewhere around fifty bucks of bitcoin. I’ve pissed that away buying one round of tequila shots at the bar…it’s all perspective. I’ll wait until the wallet upgrades are complete.

I’m very new to crypto. I want to movemy safex coins from coinspot to the desktop wallet. I watched the tutorial video but got lost when he started to copy and paste keys.
Basically a little hand holding would be helpful. Like click abc etc

So download your encrypted keys and save them to usb and print them out. Do not lose them. Just watch it again till u get it mate there is no rush take your time and when u work it out only send a trial amount maybe 500 to test. Double check the address and check again

To cut and paste the address in safex wallet. High light address then control c to copy then go into coinspot wallet and control v. U will get a email to confirm transaction check the numbers again once u have hit send

Thanks Nelson. Are you referring to the coinspot keys?

Go to setting in safex wallet u will see encrypted keys download it and save them to usb and print them.

Ok so when I login to Safe wallet for the first time, there’s a key displayed. Copy that and paste it onto the spot requiring an address on coinspot?

Thanks Doing that now. 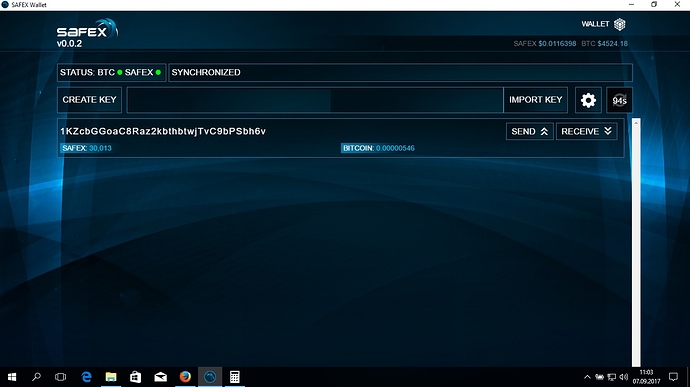 Mate just watch video until u understand. If u make a mistake u may lose them

I’ve just watched the video again just now. He’s explaining to an intermediate audience.
I’m going to try sending a few coins to the address on my home page.
I saved the encrypted keys to a usb. When I opened it it didn’t look like a key. Just a paragraph of letters and numbers. Thanks for your help. I’m really green and would like to learn more rather than rely on coinspot.

Yes that is right about the paragraph of letters and numbers. Just copy the address from safex wallet copy it to coinspot and transfer the coins. U will get a confirmation email to verify. Make sure your check your email. Let me know how u go