Why still so many questions about wallet usage despite safex wallet tutorial?

I still did not receive my coins its been 3 days and I don’t know if i have the wrong key or what? All i know have is a confirmation from coinbase telling me that my transaction was successfull. How can I track down my coins?

I still did not receive my coins its been 3 days and I don’t know if i have the wrong key or what? All i know have is a confirmation from coinbase telling me that my transaction was successfull. How can I track down my coins?

Thank you so much, I can see my coins now. You are awesome!
One more question - I sent close to $5k to get 30000 coins however, when I look at my wallet in omniwallet it says current value is $500 dollars how come there is a difference of 4.5K. Where did this amount go to?

close to 16 cents each you bought them

Omni wallet is getting its price from elsewhere and has safex at 1.6 cents.

Where did this amount go to?

Different price per coin. The coin on exchanges has not been as high as 16 cents (yet)

This is a valid concern, Dan needs to address this immediately. Basically robbing people of their money with such a high rate.

Not a good first impression for new investors in SAFEX.

If people wanna sell cheap coins it’s up to them.
Would you sell yours for 395sat?

That’s a tempting deal, considering it was just 100 sats not too long ago

That’s a tempting deal, considering it was just 100 sats not too long ago

considering it was just 100 sats not too long ago

That was when all Alts where dropping to very low amounts.

Some here got the coin at like 7 sats. Does that mean we should be selling safex at that price? The market is saying at the moment the coin is worth 370-395 to buyers.

From the time it was halted it has more than doubled.
When it eventually is back on the market, I believe it it could increase to possibly triple price. But I’m only presuming.

Most people are freaking about about the delisting, but in actuality it has created a shortage of SAFEX, boosting the price quite a bit.

Very interesting dynamic, I could only imagine the price when the market goes live and everyone’s coins are in the wallet.

It’ll be a similar scenario to right now, but with much more incentive to buy.

How long is it taking to get coins in a SAFEX Wallet? I have been expecting some for days now

Could take like 3 days sometimes, it’s getting out of hand

I just wish we could copy and paste addresses,The possibility of screwing up sending coins back and forth by hand typing is way too high,I know my Neo wallet was like that for awhile,and I got the Private key wrong many times,but it would at least tell me,You type an address to send to wrong,and its gone,for good

I just wish we could copy and paste addresses

Ive been waiting for my coins for over 4 days now. Dosent show pending transaction or show up on omniwallet.

Where did you send from?

SO, here is another question to add to the “Why so many questions?” question!

I just setup my wallet and I am able to log in. However, I am unable to see the “key maker” tab to get my private and public keys. I am using windows PC. I am not sure where I can find/create those keys. If anyone could assist with that, that would be very lovely!

Thank you in advance for the assistance and happy holidays everyone!

From the Safex.io homepage navigate to “Learn” to view some of the educational videos created by Dan Dabek. Here is screenshot: 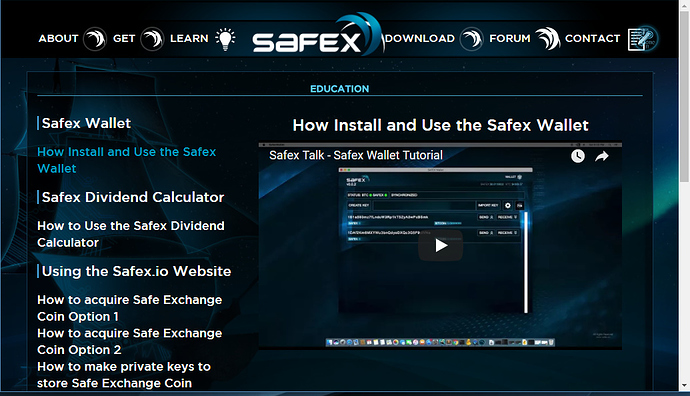 As you can see there is a video tutorial that discusses how to use the wallet. This video is based off of v0.0.2 with a few upgrades to v.0.0.3 and v0.0.4, but otherwise function the same.

After you download and install the wallet and create your password (be sure to write this down and remember it), when you “create” the wallet it should create a public and private key combination for you. If not, after you log in again to your wallet, there is an option to “Create Key”, or select the “Receive” button. Either option will create a Private Key and Public Key combination for you.

Be sure to go to settings (i.e.

The .dat file is a backup of your wallet. The other file is a text file of your public and private keys.

There is also a support channel you can access from the Safex Community on Discord.