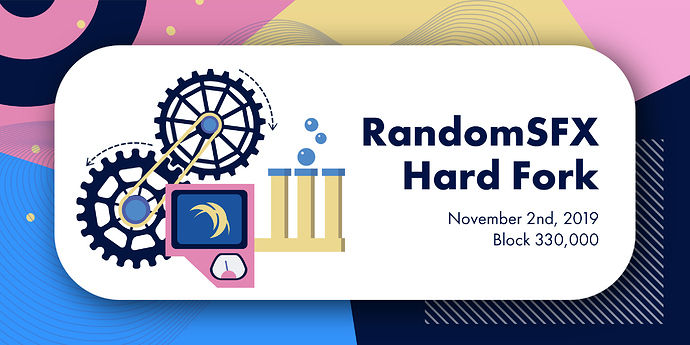 This post is to inform you that the Safex blockchain will be hard forking on the 2nd of December 2019 at block 330000.

Binaries can be found and downloaded here: https://github.com/safex/safexcore/releases/tag/3.0.1

If you run a Safex node please update it now to be ready for the hard fork next Monday. If you fail to update your node, it will eventually get rejected by the network.

The main reason for the fork is the implementation of the RandomSFX mining algorithm, which is a variation of the RandomX algorithm which is designed to give more weight towards CPU miners, and negate the potential of ASIC miners (which inevitably make the network uncompetitive to mine on).

With RandomSFX, you may find that your CPU produces more hashrate than on the old algorithm. For context, my old computer with an Intel i7 4770K has a hashrate of around 175h/s in the current algorithm. In RandomSFX, i get around 2.5Kh/s.

We strongly feel this change of algorithm will give back the power of mining to everyday miners who use regular computers, laptops, etc.

GPU mining is still possible - there is a slight performance penality being that the algorithm is mostly CPU favoured, but you will still be able to mine with your existing GPU rigs.

With the removal of ASICs and hash rental services from the network, everyone with physical hardware will have a good chance of earning a % of the block rewards.

Information for miners
Please standby for further information regarding what changes are needed to mine RandomSFX.

The dev team is working hard to update the relevant codebase for the Safex Mining Pools, along with a custom fork of XMRig, which you can include in your regular mining regiment.

We will have more information regarding this over the weekend.

I use the v2 Orbiter wallet, what do i need to do?

Nothing. Continue using the wallet like normal. The node that the wallet connects to will be updated in time for the hard fork.