No updates? Is Safex dead?

Are we not getting weekly updates any more?

Has Dan moved on to something else?

Watched a video of someone wrapping a coin in 30 minutes on Youtube earlier, how long does Dan need?

Waiting for @dandabek to explain who will be the custodian of wSFX/wSFT or the design they’re gonna use to make sure it’s secure.

There’s no work at all going on through GitHub, no new commits. Is SFX just about the Dally’s cups now?

Sure seems like it. Here we are…almost May 2021 and only one seller can sell stuff on TWM. This is not what all the long term holders hoped for or believed in. What a crazy trail of continuous waiting, letdown and disappointment. Prove me wrong Dan. I believed in you for so long but I don’t any more.

Anyone paying attention over the last few years would know that, historically, Dan does most of his coding locally, and rarely pushes it to GitHub until he’s finished working on whatever repo he’s been focussed on.

Not seeing GitHub updates is not an indication of no coding being done; rather, no code being pushed, is all.

Hey @aussiesloth, how come the new Co-Founder CPO of Safex Marketplace/Safex foundation wasn’t announced to the forum? Or anywhere else?

I think, perhaps, that you may be misunderstanding the situation. Why would such an announcement need to be made?

Safex project is the core project - open source. This is the part in which we own SFT and SFX.

Safex Foundation was created by Dan as a NFP entity to further blockchain development and education. It doesn’t answer to the Safex project.

Why would either of those entities need to necessarily report anything as part of the core project update.

Be thankful we’re getting some info as to the development of the TWM wallet by TWM Inc - there’s certainly no requirement to do so.

What Dan chooses to share outside of the core Safex development should be considered a bonus, not an expectation, imo.

There is no distinction between TWM and Safex made by Dan:

“Be thankful we’re getting some info as to the development of the TWM wallet” - it’s the only wallet that now works with Safex other than the CLI wallet at the moment? Meanwhile, all development on Safex core has stopped, but I should be grateful? 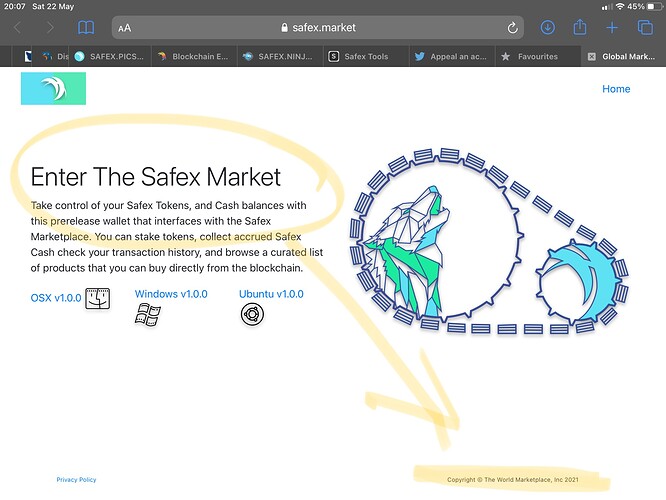 What about it? I take it you’re referring to the section that states: “After the initial TWM Wallet release, we will be able to add others to the platform in a methodical way to encourage quality listings, and quality service from the vendors using the platform” , but the website has since then also removed the orbiter wallets, for what reason? How come everyone is being forced to use TWM?

Also, lol at that screenshot. Are you showing me that the safex market and safex is a copyright of TWM after telling me I was confused? I think you’ve just proved my point for me. 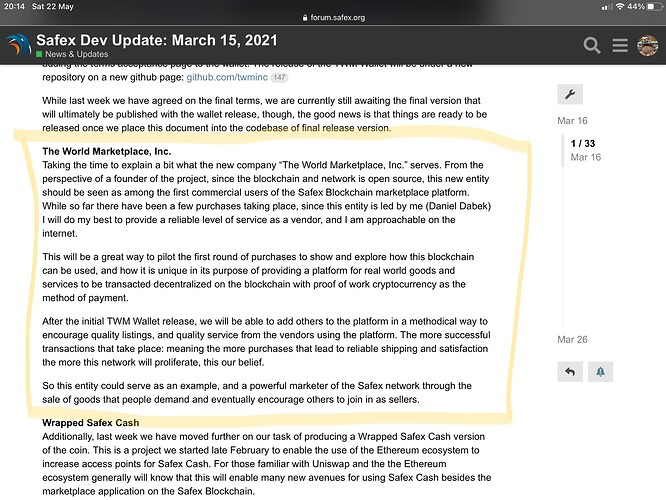 Just like Satoshi Nakamoto created BTC, then multitudes of companies rose up to use the blockchain and create wallets etc…

TWM Inc is a corporate entity created to make use of the Safex blockchain. Just because it was also created by Dan doesn’t mean it is part of the core Safex project.

Satoshi didn’t copyright elements of BTC and mix it up with a private company either, but OK…

How many wallets are coming Aussie? Where has the Obiter wallet gone?

You’re showing me a post that’s 3 months old where there has been no core development done within this time, no wrapped SFX, no new wallets, instead there is a new Co-Founder CPO of the Safex Market which has nothing to do with Safex.

Just what core development do you now expect?

I was pointing out the company name, not the copyright, which is for the website, not the name. Stop being so obtuse.

Your sense of entitlement is unbelievable.

Use the TWM wallet - it works.

“Just what core development do you now expect?”

Erm, the development Dan said was coming? i.e. wrapped SFX to join the rest of the crypto ecosystem, finished documentation, this aside, proof that the feedback mechanism works in a GUI (yet to be seen) would also be nice.

“Your sense of entitlement is unbelievable”, "Be thankful we’re getting some info as to the development of the TWM wallet”, stop being so obsequies will you, it’s painful to read.

What happened to the Orbiter wallet?

It became obsolete with the December hardfork.

What update was that in?

Common sense - it can’t update past the hardfork, ergo… It is obsolete.

, what? I’ve had wallets update along with a hardfork… This was a choice. This is why there wasn’t an update about it. Dan posted on the forum:

“Hey, with the hardfork the orbiter wallet stopped being compatible. Sincerely it was an oversight on my part not to remember that this would happen. Yet it doesn’t matter, we don’t have time to do both the orbiter and twm wallet.”