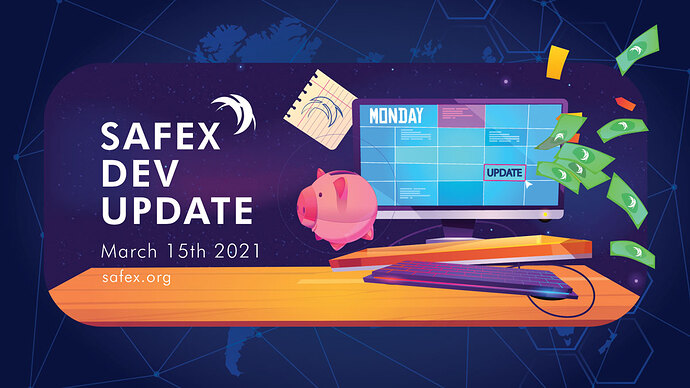 TWM Wallet
During last week we’ve prepared the API for mainnet deployment, and we have outlined the task for adding the terms acceptance page to the wallet. The release of the TWM Wallet will be under a new repository on a new github page: github.com/twminc

While last week we have agreed on the final terms, we are currently still awaiting the final version that will ultimately be published with the wallet release, though, the good news is that things are ready to be released once we place this document into the codebase of final release version.

The World Marketplace, Inc.
Taking the time to explain a bit what the new company “The World Marketplace, Inc.” serves. From the perspective of a founder of the project, since the blockchain and network is open source, this new entity should be seen as among the first commercial users of the Safex Blockchain marketplace platform. While so far there have been a few purchases taking place, since this entity is led by me (Daniel Dabek) I will do my best to provide a reliable level of service as a vendor, and I am approachable on the internet.

This will be a great way to pilot the first round of purchases to show and explore how this blockchain can be used, and how it is unique in its purpose of providing a platform for real world goods and services to be transacted decentralized on the blockchain with proof of work cryptocurrency as the method of payment.

After the initial TWM Wallet release, we will be able to add others to the platform in a methodical way to encourage quality listings, and quality service from the vendors using the platform. The more successful transactions that take place: meaning the more purchases that lead to reliable shipping and satisfaction the more this network will proliferate, this our belief.

So this entity could serve as an example, and a powerful marketer of the Safex network through the sale of goods that people demand and eventually encourage others to join in as sellers.

Wrapped Safex Cash
Additionally, last week we have moved further on our task of producing a Wrapped Safex Cash version of the coin. This is a project we started late February to enable the use of the Ethereum ecosystem to increase access points for Safex Cash. For those familiar with Uniswap and the the Ethereum ecosystem generally will know that this will enable many new avenues for using Safex Cash besides the marketplace application on the Safex Blockchain.

This system that will bridge between the two blockchains has undergone testing for minting, burning, and pausing the smart contract for generating Safex Cash as an erc20 token. Next week we hope to have more news on this project since with the marketplace emerging, more ways to engage with Safex Cash should be in more demand moving forward.

Further Exchange Listing
This week we are also revisiting discussions with bitrue.com to wrap up and reach deployment of the Safex Cash trading on the new exchange.

Documentation
During the past weeks Igor has been working on the holistic view of the Safex ecosystem and implementing documentation for all of it.

Thank you for reading and tuning in as we reach the TWM launch milestone!

Wrapped Safex all thanks to Edwin!

Hi @dandabek, would there be value to produce a wrapped version of SFT as well? While the hope is for a strong demand for SFX, the demand for SFX can be met thru mining, commercially thru the marketplace, and in addition thru exchanges.

Hopefully there will be a strong demand for SFT, but as I understand it the SFT has all been mined and is only available thru the Xcalibra exchange, should anyone choose to purchase or sell.

Hi @dandabek , will there be a wrapped SFT too? And if so, when?

Same words ervery week after 2015 , i think we can not see tmw in this year like last years

I love the idea of The World Marketplace, Inc. i was afraid that some of the first buyers might get burned and give safex a bad name but not anymore. Safex means safe exchange and safety must be our main target.
The longer it takes the better it gets , no need to worry , play with your others coins and check safex in a few years. No need for negative comments at this milestone .

Nice wods ! Can you tell me how can i sell my sft bag , when I can’t transfer from my old wallet long time , and and how can send it to exchange ? Which exchange ? I can not use xcalibra for KYC ! Lost lot of money on cryptopia , tradedatoshi and livcoin ! I want sell my bag and i cant ! This is my serious problem when I invested huge money on this project . How can i sell ?

If we are close to launch why the price is going down ! Market never lies

i not joey or other clown , i am an investors who lost money here , i want to sell my bag but i can’t , If you love this project it’s good , actually very good , i have one q , how can i sell my bag . No more

To sell your bag, do the following:

At this point, it seems you need to wait for bw.com to open withdrawal/deposit on their SFT pairing for a No KYC option.

bw seem to be a joke. They only had bots “trading” fake volume for months.
Is there any evidence they actually integrated the Safex blockchain at all?
it could be just numbers flashing on their website for what we can tell.

I traded there. Probaby there are bots, but you can trade as well

I have no choice but this way

So what exactly are the obstacles with the terms and conditions? The attorney costs must be insanely high with all this time being put into this. I am a product manager and had to outline a contract for a digital product as well with attorneys. Cost was >100k USD. So either you pour lots of money in there or there is yet another problem and the TWM is not about to be published at all and time soon. A bit more transparency and detailed background information would be greatly appreciated

I contacted to bw support , I asked them when can i do deposit/withdraw on bw.com and i get answer :

I hope i can sell my bag Soon , pray for me