Greetings, Today we released the Safex Cash/Token wallet. https://github.com/safex/wallet/releases/tag/1.0.0 You can download it for Linux, Windows, and MacOS at the link above. This wallet supports safex tokens (SFT) and safex cash (SFX) Sincerely, Daniel Dabek

https://github.com/safex/wallet/releases/tag/1.0.0
The download for the wallets link above^^: Windows, MacOS, and Linux

The release was overly successful. We’ve identified several bugs related to some platform configurations, the feed back has been invaluable to addressing any issues some people have encountered. In addition, we’ve got a list of ideas and suggestions to add as features for a future release.

If anyone has a problem with the wallet please use the support channel on this forum where the development team can review and address any issues you can describe to us.

You can use the Safex Bug Reporting Guideline. 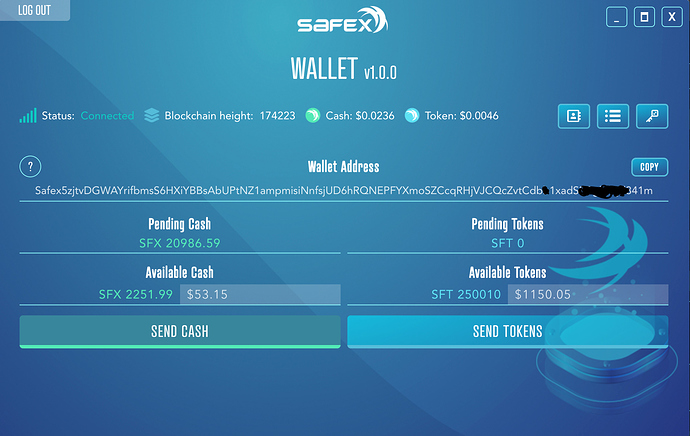 Furthermore, Stefan added an interface to check locked tokens for a given interval on the safexd node software. In addition to adding wallet commands for creating lock token and unlock token functions for user cli testing.

The code Marko has already implemented for revenue, locking, unlocking, and calculations are now being put to use for the end user setting.

Golang Libraries: V8 Wallet Specifications
During the past week, v8 wallet specifications began, in anticipation of the onboarding of a new backend developer for javascript application development. This developer will sort out the user graphical client for interaction with the safex marketplace and wallet.

This step is key for rapidly delivering user facing applications that interface with the safex blockchain.

The Golang libraries are now going into a user stories phase, so that functionality can be extended to reflect the way the application layer will require of the interaction with the blockchain.

May 16th Migration Script Run
If you are planning to time a migration: the script will be run sometime after 8:00pm Central European Time on May 16th, until the next time. This should be clear information for you to prepare in case you were standing by with the migration from the bitcoin blockchain over the safex token and cash.

Refreshed marketing initiative
Last week saw the start of our latest recruit, Nikola, who has joined our graphics and media team.

Now that Nikola has settled in, his first focus will be to compile an updated branding guideline. We felt this was a necessary step as it helps keep future graphic and marketing work consistent.

In addition to the brand guidelines, Nikola will also start on a library of assets needed for some upcoming marketing material. This we expect will take several weeks to complete.

Our short term focus here is to produce a range of marketing materials that the community can use to help promote Safex.

Scripts are currently underway for the explainer videos and will hopefully be signed off by the end of the week.

Of course, if you have any suggestions as to what else we can produce then please feel free to leave a comment.

Updated website
The updated marketing materials tie in with our next subject - the website. We realize that the website is in need of an update since it has not been updated to reflect the content available from the safex project, especially being close to so many key milestones.

Last week the team put the focus on what is required for the new website. From this, we were able to plan out a site structure, content strategy, and an SEO strategy. As well as merchant/investor/user onboarding strategies.

Currently, the content is being wireframed which will then be passed to the graphics team to visualize. Again, much like the graphics collateral, this will be a multi-week project which we hope to update you on in a few weeks time.

Thanks Dan for these updates.
I am generally lurking, checking discord every now and again while also checking github updates. Im sure there are many people who are holding Safex and are monitoring development in the same way I am.

These are really helpful in keeping us up to date and I really appreciate the small amount of time taken to provide the community with this information.

Awesome update. I see the huge progress. Can’t wait to find out what is next

Compliments to the Balkaneum team for the great work done!

Will the marketing material also describe the benefits for using the Safex platform over using Amazon, Alibaba, Ebay, etc?

Example: People tend to be easier convinced when the numbers make sense. A random chosen product on e.g. Amazon versus that same product, at same price, same courier, etc, sold on the Safex platform with a detailed cost/benefit calculation would likely be handy.

The marketing/website content is focusing on the actionable content we are progressing on:
opening a shop front without commitments
reaching a greater audience due to crypto
reduced costs related to using a decentralized system
reputation, for consumers to see openly

For example; much more detail comes in, will show when ready

You need marketing agency specialized in blockchain/crypto advertising to move this project forward. Producing marketing material for community to promote Safex is closed circuit marketing. The reach will be between people that already know about Safex, since it’s same people that are sharing twits and videos between each other. You need marketing agency that will do paid promotion and reach thousands already interested in crypto investing.

I do not necessarily agree,

Community marketing could be even better than professional marketing long term

Look at amazon, a great share of their marketing is just giving every blogger and youtuber an opportunity to get affiliate shares.

Yes, it might be good to have a little professional marketing at the beginning, but longterm linking safex marketplace instead of amazon on your blog should be more profitable and easyier.

I don’t know how the plans for affiliate on safex marketplace is yet, but I would say that would be one of the best drivers for mass adoption

Amazon’s affiliate model is mainly the reason why they dominate the search rankings. From an SEO point of view, it’s effectively automating the content gaps between product and mid-term keyphrases.

Just by the sheer weight of their website, they’ll often rank in the top three for a given product type or brand name.

Then for the longer-tail keywords like “Best XYZ for XYZ”, affiliate marketers and bloggers will put their focus on. Amazon doesn’t need to compete or put out a content strategy for these terms because they know affiliate promoters will put in the work for them. Either way, the sale will always land with Amazon.

Before you know it, the top 5 results of the most competitive product searches are either Amazon pages, or amazon affiliated bloggers/content sites, which all result in sales on Amazon.

Amazon doesn’t make any margin on sales passed through an affiliate seller. It doesn’t matter to them though. They’ve potentially gained a new user in their ecosystem and at the same time they’re gaining more traction in the SERPS.

There is a massive market out there for affiliate content promoters. Within the SEO community alone, there is a subset of people who just create websites, blogs, info pages, etc, with the sole aim of getting affiliate commission from promoting a product.

Just search “Best ~whatever item~ 2019” and i guarantee it’s some kind of affiliate promoter.

EDIT 1
Just did a search for “Best budget gaming keyboards 2019” and the first 9 results were sites that referred users to an Amazon affiliate linked product.

Indirectly Amazon has dominated the entire search results page there and put ZERO effort in at the same time. Each of those sites will have put a ton of effort in to rank for that keyphrase. It’d be near impossible for a central authority like Amazon to have people churning out content like that 24/7. Why not make the affiliates do it.

EDIT 2
I’ve just cross referenced the above search term in AHREFS and it’s put down as a HIGH difficulty term to rank for. This will have taken a lot of effort, and there are at least 9 people fighting for the top results.

THIS is the power of affiliate promotion.

I was referring to paid marketing for safex, not affiliate program for products for/from the marketplace. Completely different. MP is probably a year away, maybe more, while getting agency to promote safex is needed now, so price will increase and safex will have budget for future development. And this is not just a thought, this is how business works.

I didn’t suggest that affiliate marketing is the only solution. I’m just adding to the dialogue about what potential it could have.

If you’ve researched any of these “blockchain marketing” companies you’ll see that they’re nothing more than a content writer and PR/Cison Newswire affiliate. They all popped up in May 2018 too.

Look at the backlink structure of any big-name or previously big-name projects out there. Beyond an artificial PR campaign around May/June time last, there’s been no growth and lost all momentum.

This isn’t suggesting that we’re ignoring all of this. We’re not. There are fundamentals we need to refresh first so that when people do find us, they’re getting the right message and information needed to make an informed investment.

The things listed in this week’s report is just a short-term highlight of what we’re doing. There is a lot more coming up but we need to address the fundamentals as well.

Why do we need to refresh the website? So people are being delivered the right information when we do switch on that external promotion/outreach. The same can be said about the marketing materials. The reason we invited the community to contribute it is so everyone can have a say.

Marketing conditions have changed. We no longer have Google Adwords or Facebook Advertising at our disposal. Without these, it requires a different strategy and it’s got to be long-term to benefit from it.

As Rich mentioned, most of the agencies are vanilla and lame; anyway we have hired some professionals last year in June who are only just now working since the marketplace is coming around; marketing heavily sooner might have been a waste because we wouldn’t be ready until around these times.

I just want to sell my widgets from my laptop anywhere in the world for crypto. I’m glad really smart people are figuring out how I can do that. Either professional advertising agents or fellow widget sellers will show me where to sell my widgets.

tradesatoshi is only one exchange where safex is listed but tradesatoshi also going to delist you. Why? Are you closing your coin? Or where we can trade now?

Hey @dinesh, we’ve rebranded to the Safex Token and Safex Cash
The new coins are by now trading on 2 other exchanges:
livecoin.net and
coindeal.com