In the Version 6 of the Safex Wallet the following modifications took place:

All support requests should be directed to the forums or issue on this github repository.
https://forum.safex.org/c/support

Is there a security risk in not updating the wallet yet? I have no problem with sync. or other issues. thx

No security risk necessarily; although there were several bug fixes that enables are better user experience

I can’t send my safex to exchange. Only pending status in safex wallet.
And the price showed is not the current market price 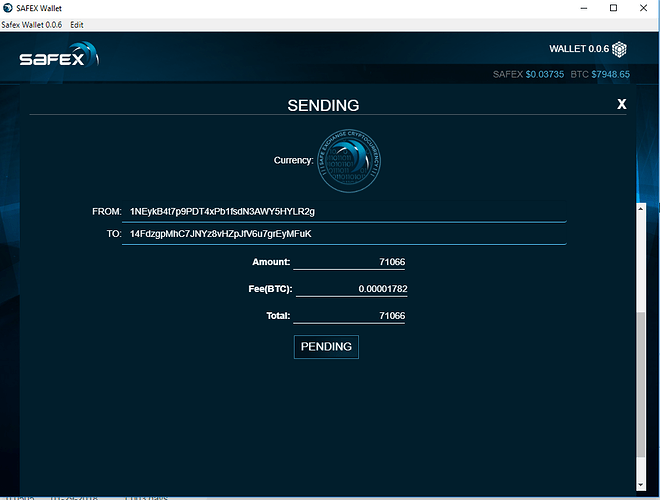 Do you have BTC on your wallet. Otherwise you can´t send them… Sometines it takes a time for sending safex.

Yes i have. I set medium fee option

There might be a glitch on win10; we are checking if/what could be the matter;

If you are on windows 10 you could make transaction on mac, ubuntu, or win 7 so you can get out sooner

I am using Windows 10. i will open omni wallet and add my address in there so i can make transactions until you fix the issue.

I was wondering if this applies to Bitcoin as well. I updated to latest version of wallet and now it won’t send Bitcoin and I never had a problem with Transactions before.

We’ve been trying to recreate these issues, yet I’ve jumped onto quite a few people’s Win10 machines and they are not having any issues at all.

@safe3xone I think you could go ahead and switch back to v5 if it was working for you;

I will be adding to the list of improvements to increase error reporting by the application to indicate to us where did it fail, so we can fix these kinds of issues so that fewer people have any problems, and if they do we can identify exactly where it took place.

I am please to report though that many people who have had issues with v5 have been alleviated in general.

Im also seeing an inaccurate safex price. The wallet says its valued at $0.04209 yet everywhere else including tradsatoshi its around $0.017?

I rolled back to .05 and still cannot send BTC from the wallet. It goes pending but it never sends the coins.

It has to be a problem with the new version of the wallet. I rolled back to old version and it has the correct price for SafeX.

I just downloaded v6 and logged in. It is showing the same safex address as my previous wallet but not showing any safex. It shows in history that 34000 safex were received in Dec 2017 but balance reads 0. Did I do something wrong? 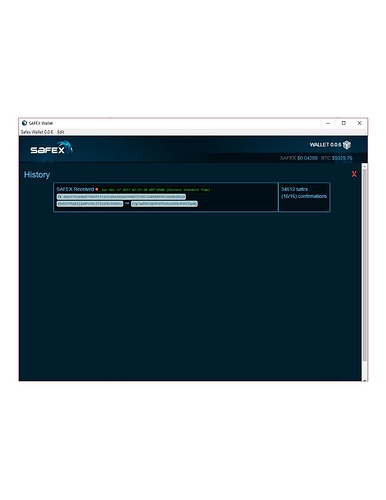 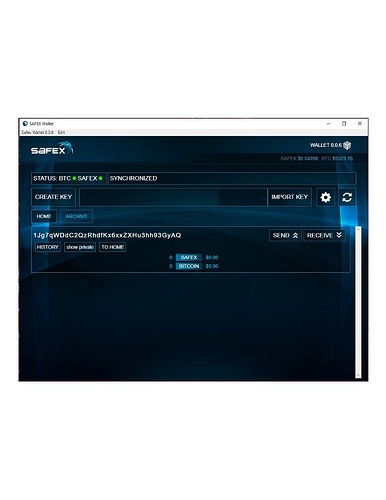 I notice your receiving address is in the archive? What happens when you move it to home?

it shows 2 other addresses, both containing 0 safex. 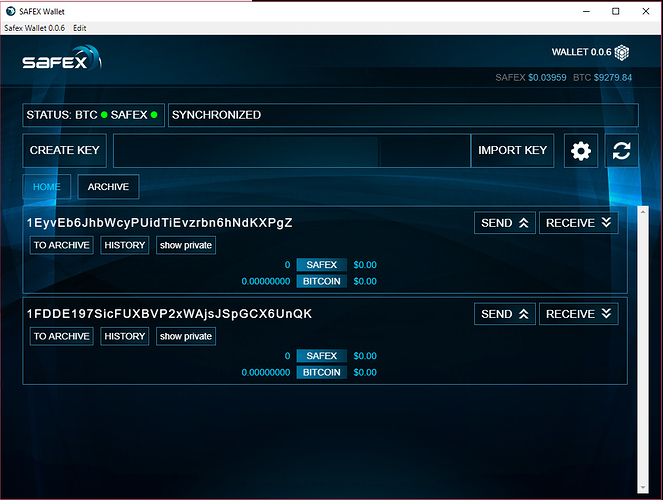 No, what I mean is move the receiving address from the archive to home, by going to the archive and clicking “To Home” button for that address.