Instructions for Voting With The Safex Voting Application

I’ve added the commentary for using the Safex Voting Application Step by Step.

The process is identical for Windows.

^^ These are the two relevant links for getting the Application and for Using it.

The Voting Application says “Error” after I click to import my private key. I tried several times but it won’t verify my public key. I’m using windows 10.

If that’s right, they you must have put it in wrong, so you need to kill the process in task manager and restart the application, basically you have to enter the private key in correctly the first time

@dyamanaka if you have bitaddress.org on your desktop you can get the uncompressed private key by choosing the “wallet details” tab and putting the private key there. fyi

My private key now starts with a “5” but I’m still getting an “Error” from the Voting Application when trying to import it.

did you kill the SafexVote process? or restart PC

Yes, I even tried a another private key that starts with a “5” and got the same error.

I just tried on my windows PC worked out alright, probably restart the pc to see

Same problem with dymanaka, restarted and nothing. I even have downloaded Electrum Wallet to check if my private key was alright, and it was. My private key already starts with a “5”.

The application gives you an “Error” when i try to import my private key (with my SEC tokens in Omni wallet). 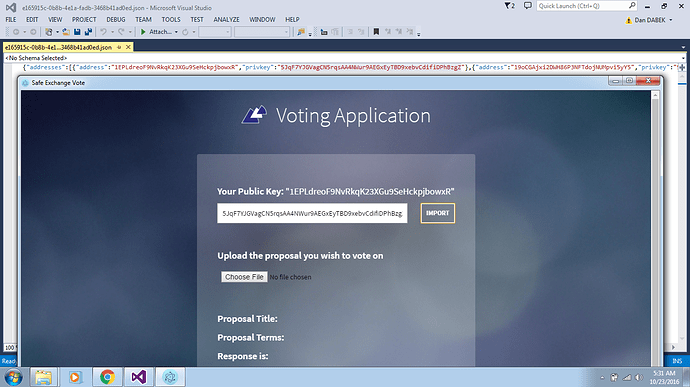 Just unzipped a fresh download, I did ctrl+c then ctrl+v to copy and paste the private key… the keys were made and exported from omniwallet.org windows 7 64 bit home edition

I just tested this with a friend, it worked with importing either the compressed or uncompressed keys; However.

We need to add support for both keys because if you even convert the key to an uncompressed “5” key it would give a different public key than the one you have the SEC at. That being said, I just need to add to the application to differentiate for compressed or uncompressed… Im on it right now.

Additionally, though I’m not sure what the error could be… maybe you are copying in the keys incorrectly. that is why there is an error. I just independently tested with Windows with another person. The key import should be fine.

I’ve created another “5”-type private key, copied to the App and the same error has occurred.

I don’t think it’s a problem of inserting the correct private key. Too many checks of my part (Electrum wallet and bitaddress.org twice). It would work without SEC tokens in a “5”-type private key, right?

It should actually work alright with either format, but just give a wrong result if using the non “5” private keys, I am addressing that right now.

On the other hand, if it isn’t working for you it must be a different issue…

An interesting approach might be to set up virtual machine with ubuntu, and build on there… but if you have non “5” private key please wait up for the update otherwise the app won’t manage to produce your vote.

Tomorrow i will try in another computer. Let’s see.

Another idea might be to set up a virtual machine on your windows computer, install ubuntu and run that.

I just produced the update and Im making the binary so that you wont need to convert the private keys anymore.

If my next atempt fails, i’ll try.

But let’t me be clear, that’s not a practical solution. It may jeopard the whole intent. Can the voting be directly on internet?

I don’t know, I think you are trying to preserve anonimity here… the process could be made like bitaddress.org, you download the whole program, turn off the internet, vote, then turn on the internet again to upload your vote.

it totally can, but I am not set up to generate votes in the browser

Also not a fan of putting private keys on the internet